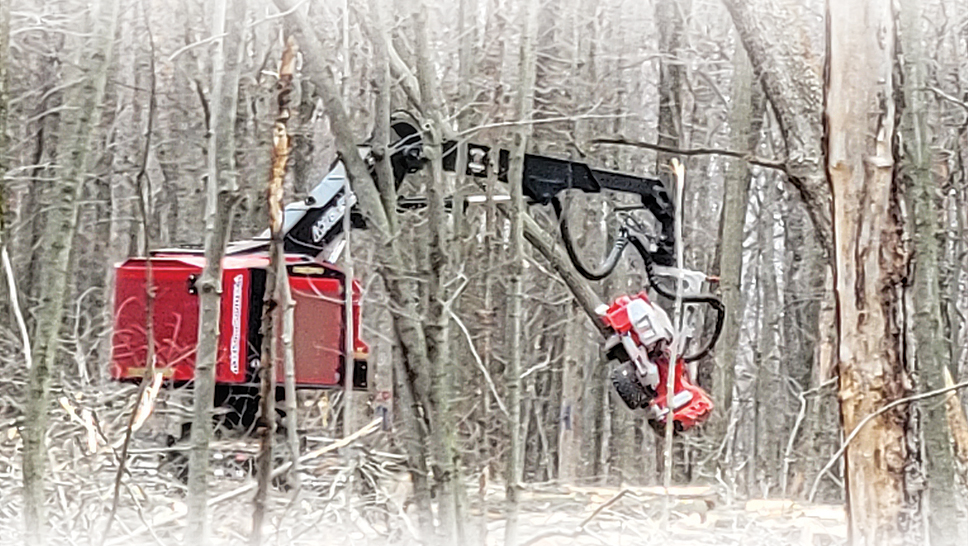 BARABOO, Wisconsin – Mike Wilm has been logging all his life – more than 40 years. For decades he was felling timber by hand with a chainsaw. When he decided to mechanize, he hit on a combination of machines that has worked well for him. He relies on a TimberPro track machine paired with a Log Max harvester attachment for processing trees that have already been felled. And he has the newest head from Log Max to do the job: the 7000XTTS.

Mike grew up on a produce farm with greenhouses in Eagle, Wisconsin, less than 40 miles southeast of Milwaukee. He began cutting trees when he was 17.

His father died when he was 17, and his mother sold off the farm equipment. Mike began working in logging and also did some dairy farming until 1983, when he exited farming and concentrated on logging. He incorporated his business, Hack-Away Forest Products, when he was in mid-20s.

Today Mike works out of the office in his home in Baraboo in lower central Wisconsin, about 40 miles north of Madison. He has a small shop plus a building that houses firewood packaging operations. His wife, Tammy, does the bookkeeping. A son, Jake, drives a truck and oversees the trucking operations.

The company has 12 employees, including Mike and his family. Employment fluctuates somewhat, although the number stays pretty consistent; in winter there is less need for employees in the firewood operations but more on the logging side.

“We have real good employees,” said Mike, 61, who would like to transition his company into an employee-owned business in the near future.

The company operates one crew in the woods. Felling is done mainly by a TimberPro 735C track feller buncher paired with a Quadco hot saw; the TimberPro arranges the trees in bunches. A TimberPro 735D track harvester with the new Log Max 7000XTTS follows, processing the trees already on the ground. Both TimberPro machines have leveling capability. A John Deere 1210 forwarder transports the wood to a landing; Mike also has a new John Deere 1510 forwarder on order.

Hack-Away Forest Products also is equipped with a Cat D6 for building roads, Cat 262 and 299 skid steers for handling logs in the woodyard, and a pair of Cat forklifts for loading and unloading the firewood kilns.

Hack-Away Forest Products is unusual in that it harvests timber on Managed Forest Law lands, and it normally works in very steep, rocky terrain. “We do a lot of select cuts, a lot of managed forests,” said Mike. The state’s Managed Forest Law program provides tax advantages to landowners who enroll land and agree to a forest management plan. “That’s what makes us different. We cut a lot of that, and it’s very tough country – steep, rocky bluffs.”

“Our utilization (of the forest) given the ground we work on is way better than any logging contractor around here,” added Mike.

“There’s not much mechanized logging around here,” said Mike. “Everything else is hand cut.” Most sawmills in the region have loggers harvesting timber by hand and skidding the tree-length logs.

Mike buys all his own timber. A typical tract is about 40 acres. The dominant trees in the region include a lot of red oak. “We’re trying to steer clear of that right now,” said Mike, because the markets for red oak grade saw logs are weak. In addition to red oak, other common species are soft maple, hard maple, aspen, and “a lot of ash.”

The company has been operating the TimberPro-Log Max combinations since 2012 and is on its third TimberPro-Log Max configuration. TimberPro originally was a Log Max dealer, noted Mike, so when he decided to mechanize his operations and invested in his first TimberPro, “it seemed a good fit” to pair it with a Log Max head.

The TimberPro 735D replaced another TimberPro 735C that had been paired with a hot saw. It was an effective combination, according to Mike. “We basically ended up buying a (TimberPro) 735D and put a new head on it…This is our third Log Max head, and this is by far the best of them all.” Mike previously had a Log Max 7000XT. The new 7000XTTS incorporates a number of improvements.

Dan Rose, 38, is an employee of Hack-Away Forest Products and operates the TimberPro-Log Max 7000XTTS combination. He previously operated the other TimberPro, harvesting trees off the stump and processing them with the Log Max 7000XT.

“They made quite a few improvements,” noted Dan, including design changes that make it easier to maintain the head and work on the Log Max 7000XTTS.

Dan, who has worked in logging since he was 18, has been an employee of Hack-Away Forest Products since 2012, although he took an 18-month break to work on his own.

The Log Max is mainly used for processing trees that have been felled by the other TimberPro, but Dan also cuts some timber with the attachment.

Dan, who does all the mechanic work for Hack-Away, also credited Bob Shelly, a Quadco Group product support specialist based in Rhinelander, Wisconsin, who serves loggers in Wisconsin, Michigan, and Minnesota. Bob has helped them tweak the head and get them up and running smoothly.

For example, a new length measuring unit is equipped with smart features, such as a contactless sensor, has durable tapered bearings, and is easier to lubricate. A new laser sensor resets the length measurement without having to cut, which saves fuel, wear and tear on chains, and increases the value of the wood.

The measure wheel is larger, the measure wheel cylinder and hydraulic circuit were redesigned, and the measure wheel arm and attachment have been reinforced. The enhancements allow the measuring wheel to follow the contour of the log better and provide a more accurate outcome. “It pulls through much easier,” noted Bob. “You can float the wood through.”

The delimbing knives are new – reinforced with welded knife edges and thicker; they also are interchangeable to extend life. In addition, the knife has a smaller rounded tip to make it easier to pick up stems. A steeper angle on the lower part of the knife makes them more effective in hardwood. The cylinder for the lower delimbing knife was updated to increase lifting capacity and improve stem holding.

The top saw performance has been enhanced with a larger motor and auto tensioning. “It is very similar to the bottom saw used on some of our smaller heads,” said Bob, and improves performance and durability.

The main or bottom saw now is backed by a bigger cylinder to ensure the saw is driven completely through the wood for a clean cut. To increase the performance and durability of the top saw, it was updated with a new valve. “It’s more powerful,” said Bob, “faster.” It has also been given a new position on the frame to simplify service and settings.

All the improvements add up to easier maintenance and less downtime – which translates to more production time, observed Bob.

The application of using a Log Max to process trees that have been felled by another machine is “pretty common” in Wisconsin, said Bob. There are several benefits. It obviously increases production since two machines are operating. Using the Log Max solely for processing is easier on the attachment.

Finally, it is difficult to find experienced equipment operators, noted Bob. Using the Log Max dedicated for processing, a contractor can hire a less experienced worker who will not be involved in felling, which is certainly much more demanding. There is less risk of damaging equipment because the operator is only picking the stems up off the ground. “It’s going to increase production, and it’s less wear and tear on the machine overall,” added Bob.

When he was considering a harvester attachment for the TimberPro, Mike weighed options from other manufacturers. “I would say the things that made us go to Log Max again is, we understand them. And we understood what their pros and cons were.” And the new 7000XTTS, with its many improvements, overcame any challenges or issues associated with the earlier model.

Mike obtained the new TimberPro in February, but with the spring break, the company was not fully rolling again until mid-July. “So far, we would consider it very good.”

Mike currently is juggling a few jobs. One is about 40 acres, a management cut on a Managed Forest Law tract. The ground is rocky but not that steep. The dominant trees are soft maple and hard maple. The job is about 65 miles from a sawmill he supplies with grade logs, 30 miles from a pallet mill, and only 12 miles from his woodyard, where he produces firewood.

The logging machines travel over the slash material to break it up to help it decompose and return nutrients to the forest floor.

“We build our own roads,” said Mike. “We spend a lot of money closing jobs out and seeding them down.”

The company used to work up to 75 miles away but was able to “slim down” to 50, said Mike. “Last year we never went more than 20 miles,” and he thinks he can keep that range for the foreseeable future.

About half the time Mike is driving one of the company trucks. The other half he is scouting timber, building roads, and moving equipment.

Mike used to supply pulpwood to the Verso paper mill in Rapids, which closed in 2020. Now, all that wood is used for firewood. Although grade saw logs for the lumber market are down, markets for firewood and pallet bolts are good – both demand and pricing. With inflation running high, Mike is able to compensate for it with his pricing.

Mike began producing and selling firewood when he first began logging and has continued to do so; it has been part of his business for more than 40 years. He has relied on Multitek firewood processing machines since 1983 and currently has a model 2040 – his fifth Multitek. His woodyard is about 4 acres, including an acre of concrete pad for the firewood processor.

Firewood sales are an important part of Mike’s business, accounting for about half of his revenues. Mike sells firewood to campgrounds and a good volume is sold wholesale into Illinois.

All his firewood is kiln-dried in three kilns from Kiln-Direct. About two-thirds of his production is packaged with Twister Industries equipment stretch wrap film.

The region supports a number of resorts and campgrounds. During the pandemic, there was a surge in people camping, and “it kind of worked out for us,” said Mike. Kiln-dried firewood has become “pretty popular.” Mike attends a trade show for campgrounds to market his firewood business.

Employees are eligible for paid holidays and vacations, and Mike’s company pays 100 percent of the premium for group health insurance.

“We have very good employees,” noted Mike, “but we definitely could use more. That’s a tough person to find right now.”

Mike is a member of the Great Lakes Timber Professionals Association and attends the organization’s meetings. Employees receive training in the Forest Industry Safety & Training Alliance program through the association membership.

Mike enjoys camping and has a Harley-Davidson motorcycle he likes to ride, but added, “I have very little time for that.”

Wisconsin Logger Has Had Good Mentor to Help Grow His Business