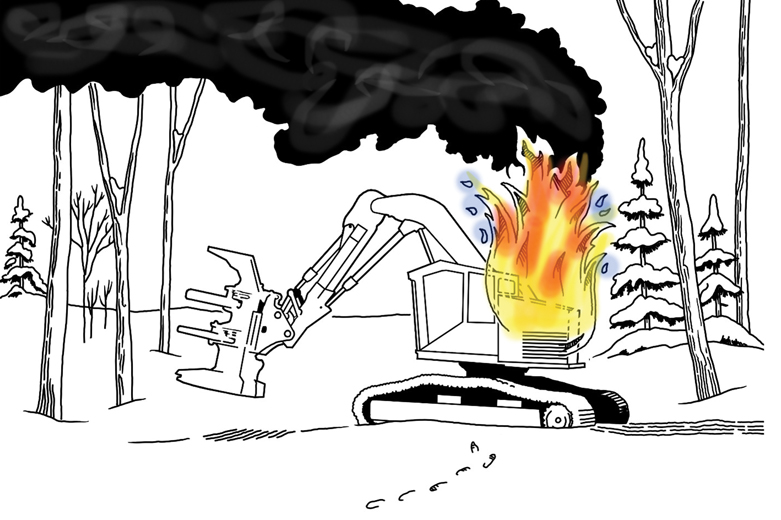 Background
On a logging job in the Lake States region during February, a track feller buncher experienced a blown hydraulic hose. The logger running the buncher called a skidder operator for a tow to the landing where the equipment could be repaired.

Personal Characteristics
The business owner has been logging for nearly 50 years. This was the first time in his career that he experienced an equipment fire.

Unsafe Acts and Conditions
The blown hydraulic hose leaked, and the flammable fluid came in contact with a
hot surface.

While running the buncher, the operator noticed the hydraulic hose had ruptured. The hose leaked hydraulic fluid that ignited when it contacted a hot surface. The operator and several other workers attempted to put out the fire with multiple fire extinguishers but were unsuccessful.

No injuries resulted from the equipment fire. The buncher was a total loss, which significantly impacted the production and profitability of the logging business.

• Identify ignition sources on logging equipment. Hot engines, electrical faults, and exhaust surfaces are considered ‘hot spots.’
• Schedule preventative maintenance to inspect machines for worn parts. Aging equipment may need to be inspected more often.
• Debris from logging, such as leaves, branches, and sawdust, can accumulate on
hot surfaces. Inspect these areas several times throughout the day. Shut down the machine and clean debris from hot surfaces if found. Common spots for debris accumulation are belly pans, side shields, and access guards.

• Check for a buildup of grease, oil, and fuel from leaks or spills.

• Implement a proactive review of electrical systems and wiring components.

• Keep fully charged fire extinguishers on board the equipment.

• Shut down equipment before fueling.

• At the end of the workday, remain on site for 15-30 minutes to monitor machinery for fire ignition.