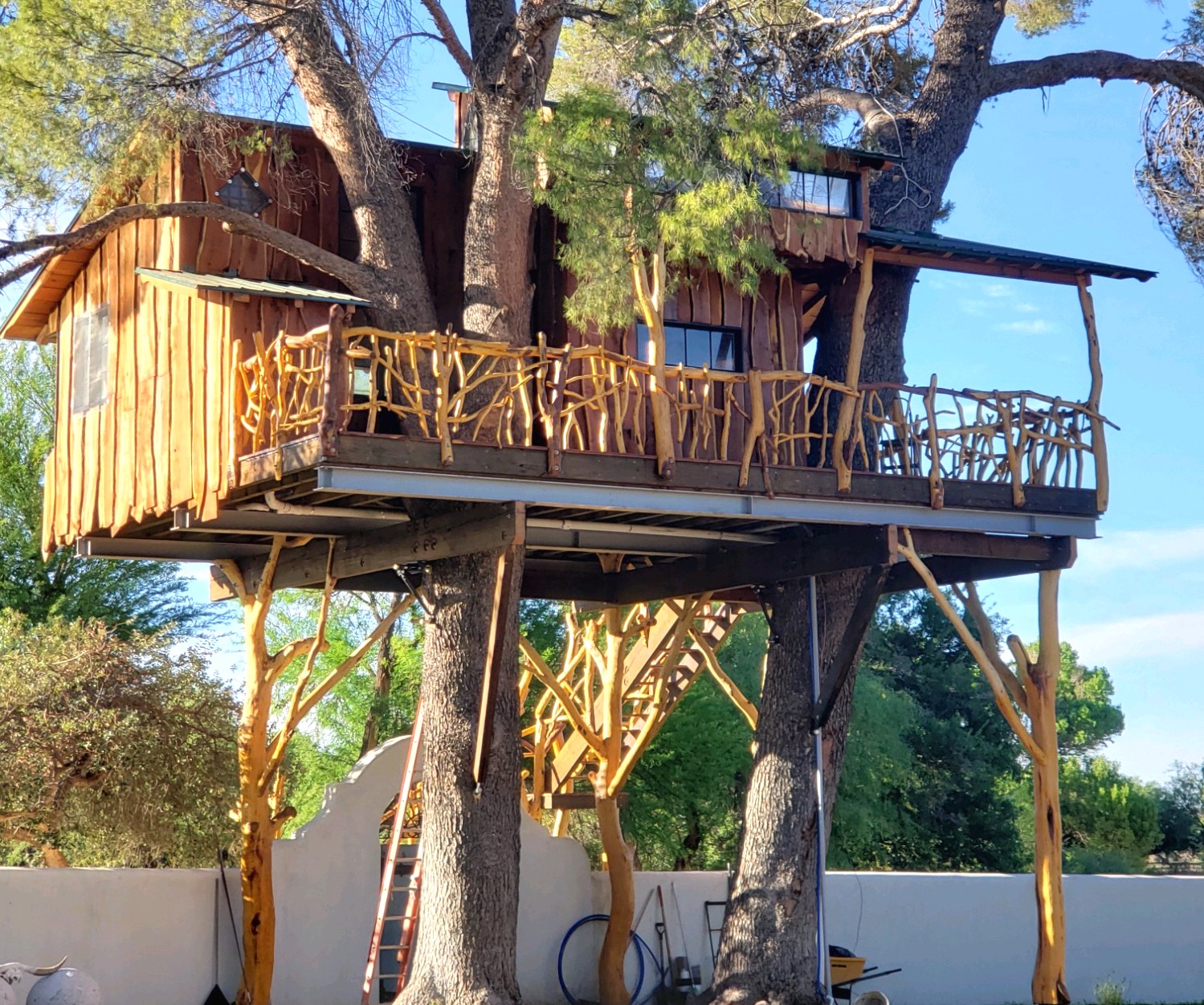 TUMACACORI, Arizona – Mesquite trees are a dominant feature across the southern Arizona desert landscape. These shrubby, irregular plants are a hardy survivor despite the environment’s harsh conditions.

The inherently imperfect, dense timber of the Sonoran Desert Velvet Mesquite along with an introduction to the sawmill first drew Arthur and Valerie Flores away from other careers nearly two decades ago. In the 20 years since its beginning, this husband-and-wife team established the Tumacacori Mesquite Sawmill in Tumacacori, Arizona.

“We now have the reputation as being Arizona’s oldest and largest supplier of responsibly harvested mesquite products,” said Arthur.

When a local rancher explained a tree house concept for his granddaughters designed to complement the organic, rustic environment of the southern Arizona area, Arthur and Valerie were intrigued with the idea of using mesquite lumber in its construction. The couple are no strangers to creating unique mesquite products themselves and are aware of the many ways indigenous Native Americans utilized various parts of the plant throughout history, but this tree house idea seemed like a completely new concept.

“The prospect of utilizing mesquite for the tree house took it to a whole different level…twenty feet above ground level, to be exact!” said Arthur. The considerable interest this unique idea sparked within Arthur and Valerie led them to join the project team. “The design, engineering, and fabrication was done by The Treehouse Guys, LLC, from Vermont. The crew, led by James ‘B-Fer’ Roth, spent approximately 10 weeks here in Arizona during the construction,” said Arthur. In addition to the tree house’s unique use of mesquite wood, the structure would also feature an outside deck for spectacular views of the mountainous desert landscape, and its interior would include a living area and bedroom loft, complete with running water and electricity.

All lumber used to create the tree house was milled at Tumacacori Mesquite Sawmill with their Wood-Mizer LT40HD Super Hydraulic portable sawmill. Douglas fir was chosen for the tree house’s floor joists, roof, and major structural support. More specifically, the material was old forest Douglas fir sourced from a pre-World War II barn in Canada, obtained and imported by the landowner, and brought to the sawmill on flatbed trucks. “The Douglas fir was relatively easy and took about a week to mill,” said Arthur.

The indigenous Sonoran Desert Velvet Mesquite used in the stair treads, siding, and stair and balcony rails was primarily sourced from the landowner’s property and other nearby ranches. “Much of this mesquite was cleared for the purpose of increasing farmland or cattle grazing,” said Arthur. As mesquite is a more challenging wood to work with, it took about 10 weeks to mill to the specifications of The Treehouse Guys’ lead foreman. The completed mesquite tree house sits around 20 feet above the ground and offers an under-roof area of about 700 square feet. “We are especially proud to have been a valuable team member of this unique project,” said Arthur. “The reaction of all who see the mesquite tree house reaffirms our belief that we were a part of something special and unlike anything in southern Arizona.”

Maine Man Does It All with Wood: Logging, Sawmilling, and Firewood

Sawing Lumber for Cabins in Michigan