ELIZABETHTON, Tennessee – If you use reclaimed lumber in a home improvement project, that lumber should be kiln dried. Take it from Joe Winfrey, whose company, Atlantic Reclaimed Lumber, is one of the leading processors and suppliers of lumber that is reclaimed and recycled from old buildings.

Joe has turned to Kiln-Direct to supply the latest dry kilns for his company – and he plans to continue relying on Kiln-Direct in the future.

Atlantic Reclaimed Lumber is located in Elizabethton, in the mountains of northeast Tennessee, adjacent to Johnson City. The company has 11 buildings situated on a little over 7 acres: office, mill and manufacturing operations, grading shed, warehouse, maintenance shop. Most operations related to reclaiming lumber actually are outside and not under roof.

The business employs 25 people. Atlantic Reclaimed Lumber processes about 40,000 board feet per day.

“Ninety-eight percent of what we deal in is reclaimed lumber,” said Joe. “We do handle some new, specialty lumber, but that is a very small part of what we do.”

Joe was born and raised in High Point, North Carolina, formerly the furniture capital of the world. After graduating from Guilford College, he went into the veneer business and had his own company, manufacturing hardwood veneer and supplying it to furniture makers.

However, when the U.S. furniture companies began setting up manufacturing operations in Asia, Joe “saw the writing on the wall.” He sold his company and moved to the mountains of east Tennessee, where his wife originally was from.

Joe launched Atlantic Reclaimed Lumber with a partner, but bought him out after a few years.

Joe had the lumber in the back of his truck on a trip into town. A cabinet maker spotted the lumber, approached him, and offered Joe $400 on the spot for the load of wormy chestnut.

Joe helped him load it and thereafter “started piddling around with reclaimed lumber in my driveway.”

“We have grown every year,” said Joe, who now has been in the wood products business for 42 years. “Early on, we would grow by leaps and bounds.” The business had relatively simple operations in those first years. Joe purchased lumber that had been salvaged from barns or other buildings and sometimes tore down a building to salvage the wood material.

Employees removed all the nails and trimmed the lumber to length. “We didn’t do any manufacturing,” said Joe.

That gradually changed as the volume of business grew, justifying investments in buildings and equipment. “We have grown. We are now a full service millwork company making flooring, wall cladding, ceiling decking, and furniture parts. We even sell some products to big box stores now.”

“As the demand for our product grew, we just did whatever it took to make it happen,” added Joe.

The company’s only flat year was 2020 – the year the COVID-19 pandemic struck. “We didn’t experience any growth in 2020,” observed Joe. “We lost 70 percent of our backlog in March of 2020 when the pandemic first hit, but we recovered by year’s end.” The company rebounded and began growing again in 2021. “We’re back up considerably again,” said Joe.

Atlantic Reclaimed Lumber sells primarily to contractors who build multi-million dollar houses. In the past it sold products under private labels for other companies, but it has outgrown that segment. Ninety-five percent of production is sold to building contractors in the U.S., Canada, and Mexico. The remaining 5 percent is sold to markets in Asia and Europe. The company also sells some reclaimed lumber to other businesses that have their own milling operations to remanufacture it.

Atlantic Reclaimed Lumber obtains wood material from factories, mills, and other buildings that were constructed in the 1800s and early 1900s and now sit vacant. The company dismantles the old buildings to obtain the raw material it needs.

In the case of an old barn, the company may use its own labor force to tear down the building and salvage the lumber. Joe also buys lumber from small contractors who tear down old barns and sheds.

“We just finished up a large tobacco warehouse and a large furniture plant,” said Joe. “Those kinds of buildings are now empty.”

“The way we find buildings is by word of mouth,” said Joe. “Reclaimed lumber is a multi-billion dollar industry. There are very few players of substance. Everybody knows each other. Word just gets around. We don’t have to seek them out as much as they find us.”

Most of the buildings are in the Eastern U.S. – generally, from Georgia to the New England states – but Joe also buys reclaimed lumber from sources on the West Coast and in Canada.

The company works with both reclaimed hardwood and softwood. “Probably 60 percent hardwoods,” said Joe. The main softwood species is longleaf pine, and the company supplies a lot of longleaf heart pine. “A lot of big factories were made with longleaf pine timber in the eastern United States,” said Joe. The wood was used for beams and decking.

“Freight dollars are a huge consideration today,” noted Joe. “The closer to the yard we can source our lumber, the better we can offer that lumber at a fair price to our customer.”

The lumber is transported to the company’s facilities and graded. Then workers begin the task of removing all metal: nails, screws and other fasteners, even pipes.

Kiln drying the reclaimed wood is a very important part of the process, although you might not think so. “You have to kiln dry reclaimed lumber,” explained Joe. “A lot of the lumber is dry when it comes out of buildings, but there may be insects in the wood, so drying the lumber is important for two reasons. Number one, to uniformly dry the wood and make it stable. And number two, to kill any bugs.”

“We have been enormously pleased with Kiln-Direct,” said Joe. The company’s Kiln-Direct dry kilns are equipped with a double burner system and fueled with propane. A typical kiln with one burner may take 7-10 days to dry a load of lumber,Joe noted. With the Kiln-Direct units with double burners, the kilns can be up to temperature in a couple of hours and dry the wood faster. “In many cases we’re drying lumber in 24 to 48 hours,” said Joe, “sometimes a little longer.” The lumber is dried to a target of 6-8 percent moisture content.

The company’s first unit from Kiln-Direct was installed a few years ago. The newest one, with 9,000 board foot capacity, was being installed when Joe talked with TimberLine.

The newest unit brings the total number of kilns to five – two from Kiln-Direct and the other units supplied earlier by other kiln companies.

“If I purchase any kilns in the future, it will be from Kiln-Direct,” said Joe. He has recommended the supplier to other wood products businesses. “And they are enormously pleased with their operations as well,” added Joe.

Joe saw an advertisement for Kiln-Direct and contacted them prior to purchasing his first kiln from the company. They put him in touch with another customer that Joe knew. “I started talking to them. I went to look at their kiln and saw how easy it was to operate. I was sold. I said, ‘Let’s try one.’ And we loved it.”

After the material is dried, it undergoes various remanufacturing processes, depending on the end product. “At that point, depending on the texture of the product the customer wants, it goes through every single woodworking operation that any other company would do to make surfaced lumber or tongue and groove material or other products,” said Joe.

The company is equipped with rip saws, trim saws, planers and moulders for remanufacturing the material.

The products made with reclaimed lumber will end up in homes ranging from $1-25 million. “That market is not as affected as perhaps some other markets in times when the economy is up or down,” observed Joe.

Atlantic Reclaimed Lumber also mills a very small volume of specialty new lumber. For new lumber and some specialty products, it uses a 100-year-old sawmill that was refurbished.

The mill runs a 52-inch circular saw blade. “Texture is very important,” said Joe. Some contractors want lumber with marks on it from being cut with a circular saw. “That’s all we use that sawmill for,” said Joe, for milling some new lumber and old timbers.

The company also is equipped with a Wood-Mizer fully hydraulic band mill for resawing material. It is used on a daily basis, primarily for cutting a smooth face on heart pine material for flooring. “For that, we don’t want to see the saw marks,” noted Joe.

Among other machinery, the company has a specialty Kentwood band resaw – purchased from Stiles Machinery – that can saw very thin veneers, down to 1/24th of an inch. Wood material cut to a small thickness on that machine may be shaped – bent, for example – or used as a veneer to cover a surface.

The task of removing the metal is very labor intensive, but there is no way of getting around it. Joe has tried various machines and tools, but none proved satisfactory. “We tried everything on the market. What we use is labor,” and nail pullers, crow bars, and drills.

“You don’t want to tear the board up with some type of industrial metal remover because it would destroy the integrity of the board or the appearance.” Each piece of lumber is scanned with a metal detector.

The company grew with the same building contractors that it began with 20 years ago. “We have grown with those companies and outgrown those companies,” said Joe. “The life of our company is new business. A lot of that comes to us as referrals.”

The company markets to builders via social media and email. It may focus on an area where it has noticed builders using reclaimed lumber and email marketing information to contractors.

When the pandemic erupted in March of 2020, Atlantic Reclaimed Lumber lost 70 percent of its backlog of business in just 30 hours.

The company adapted to working under the cloud of the pandemic. Elizabethton is a very rural community, noted Joe, and many people in the region were reluctant to wear masks to help prevent the spread of covid.

In Atlantic Reclaimed Lumber’s operations, not many employees worked in close proximity, but arrangements were made to ensure they were at an appropriate distance from each other. “We had to kind of become a little more efficient at what we did,” said Joe. Masks were required for people working in the office and visitors to the office. No employees were laid off.

“We made it through. Some people got sick, of course, but we weathered the storm pretty good. It hurt our volume and ability to supply customers for two or three months until we got the bugs worked out.”

Joe is a graduate of Guilford College in Greensboro, N.C., after which he did an internship with the Brookings Institute, a Washington, D.C. think tank.

He gives a great deal of credit for the company’s success to his employees. “In rural Appalachia, where we are, these folks are very proud, and they take pride in what they do. I honestly believe that they would do anything that was asked of them, and they have over the years. The employees are the best.”

The other reason for the company’s success is its relationships with both customers and suppliers. “They’ve become friends,” said Joe.”

“No matter what we do, without those relationships and without our employees, we could not be successful in any way, shape, or form.”

“There is nothing special about what we do, but we believe we do it better than anybody else.”

Joe is laying the groundwork for his eventual exit from the business. Joe plans a major expansion in the next two years to double manufacturing capacity. “We’ve already bought machinery and already begun grading the land.”

“When I leave the company, not too many years down the road from now, I’m going to leave it to the employees, turn the business over to them.” 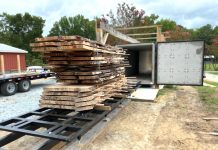