HORSE CAVE, Kentucky – Dan Pearman is a newcomer to the firewood industry, but his business experience provided a firm foundation for starting a firewood business based on a model of selling packaged firewood to wholesale customers. He turned to three key industry suppliers – including B&B Manufacturing – to equip his company to produce packages of kiln-dried firewood.

Dan, 55, grew up in central Kentucky, and his company – Horse Cave Hardwood – is based in the community of Horse Cave, which is about 80 miles due south of Louisville. He launched his firewood business about a year ago and began shipping in May of last year.

Dan earned a bachelor’s degree in education from the University of Kentucky, where he was enrolled in the university’s ROTC program. After graduating he served in the Army for four years as an airborne infantry officer.

Most of his career has been in the post-industrial plastics recycling industry. Dan started a business buying post-industrial plastics scrap from the automobile industry. He purchased the scrap from Toyota manufacturing plants in three states and some key suppliers, reprocessed it into plastic flakes, and packaged it and sold it to companies that used it in injection molders to make parts for Toyota.

He sold the business in 2010 and for a time worked as a civilian for the Army, selling recyclable materials – brass, steel and other metals, plastics, paper, cardboard, and so on.

After that stint he went to work as a project manager for a contractor that constructed commercial buildings – mainly hotels. (He was acquainted with the construction industry since his father had been a contractor.)

Dan was working for the construction company in Seattle. When the pandemic struck in the spring of 2020, it adversely impacted the travel industry, including the hotel business. Plans to build new hotels were put on hold, and Dan and many other employees were furloughed.

“When the pandemic started, and things changed, we decided to go for it,” said Dan. “The world shut down for a minute, and I had time to focus on it.”

“I wasn’t going to sit around and wait for everything to get started again,” added Dan. “The firewood business seemed to be flourishing during the pandemic. It’s almost like the market increased.”

Dan’s business model was to produce and sell packaged firewood wholesale to customers, and that’s what he has pursued. As he launched the business Dan immediately began marketing efforts targeting national retail accounts; his experience in the recycling business dealing with large corporations was beneficial. He also began efforts to develop a steady supply of logs.

When Dan decided to start a firewood business he raised capital from his brother-in-law and several other investors. He leased a 6-acre site with a 25,000-square-foot warehouse and invested in three key pieces of equipment: a firewood processor, a firewood kiln, and a firewood packaging system.

Although he considered various manufacturers and made comparisons, he was guided by the experience of the friend who was in the firewood business, and that person’s successful experience with suppliers. Dan chose a Multitek firewood processor, a Kiln-Direct firewood kiln, and packaging equipment from B&B Manufacturing. He also invested in a Multitek disk cleaner to produce clean firewood free of debris and a conveyor.

Dan contacted B&B Manufacturing about purchasing the company’s WOOD-PAKer™ firewood bundling system and looked at the company’s videos. “I really felt comfortable with that machine,” he said, and with Bill Burlingame, who handles matches sales and machine diagnostics for customers, and the company. “I felt good dealing with him.”

The WOOD-PAKer™ is essentially a conveyor line with raised metal stakes, a set of four used to form a bundle of firewood. A piece of plastic shrink wrap is put into place, the firewood loaded on top of it, and the shrink wrap folded into place. As the conveyor advances automatically, it passes through an oven, and the heat shrinks the plastic into place and secures the firewood in a neat package.

B&B Manufacturing, located in Olean, New York, offers several models of the WOOD-PAKer™ that range in length from 16 feet to more than 43 feet. A longer system allows more workers to be loading firewood onto the conveyor. All models run on 110 volts and use propane to heat the oven. The conveyor is a chain and gear drive mechanism. The WOOD-PAKer™ features a high temperature air blower fan for heat exchange in the encased, air vent oven. The equipment is virtually maintenance free, and no special tools are required. Smaller models are available as trailer units.

B&B Manufacturing also supplies shrink wrap in perforated rolls for easy dispensing as well as stretch wrap plastic and mesh bags for its other two bundling options. It also supplies fire starter sticks that can be enclosed with each package of firewood and nylon handles that can be attached to plastic-wrapped bundles.

(For more information about B&B Manufacturing and its products, visit www.thewoodpaker.com or call (716) 373-5881.) Horse Cave Hardwood employs about 15-20 people. Two key employees are the log yard manager, who operates the Multitek firewood processor, and the supervisor of the packaging line. Nearly a dozen employees are involved with firewood production and about eight in the bundling operations.

The firewood processor is set up in the log yard. After the firewood has been kiln-dried it is stored under roof and packaged in the warehouse. The bundled firewood is loaded on pallets and hauled by the tractor-trailer load within a few hundred miles to distribution centers. Dan’s customers arrange for trucking. Some customers require handles to be attached to the bundles so consumers can easily lift them and carry them, and some also require labeling.

Dan buys logs from logging contractors. There are numerous sawmills in the region, and many of them have their own logging crews, he noted. Horse Cave Hardwood specs hardwood logs from 7-20 feet and 6-17 inches in diameter.

Currently, log supplies are good, and Dan keeps a close eye on it. “I consider the log supply every day, all day. The timber supply – that’s our life blood.”

He also monitors where his log suppliers are working and the haul distance to Horse Cave Hardwood. The trucking costs of low-grade hardwood logs is a big portion of the cost of the wood, noted Dan. “When logging crews move…that changes a lot, depending where they’re working. Everything can be great when they’re only 10 miles away,” but the cost of logs can rise substantially when a logging contractor is farther away.

Dan chose a Multitek model 2040XP2 firewood processor to be the company’s workhorse for producing firewood. The machine is equipped with a box-style splitting wedge to split the wood rounds into square-edged pieces for easy packaging. “It’s an excellent machine,” said Dan.

The Multitek model 2040XP2 is the company’s flagship firewood processor for commercial firewood production. It can process logs up to 23 inches in diameter and 40 feet long.

Powered by a John Deere 125 hp diesel motor, it can produce 4-½ to 7 cords of firewood per hour. It features Multitek’s patented overhead shuttle grapple that advances the log and clamps it securely. Other standard features include a fully equipped operator’s cab with electric joystick controls, 60-inch circular saw that bucks the logs into rounds and with a hydraulic brake, and a laser measuring system.

A factor in the decision to produce kiln-dried firewood was knowing that the company’s product had to be certified pest-free in order to cross state lines and for quality control. “I realized pretty quick we were going to go with Kiln-Direct equipment,” said Dan. “It’s performed really well.” The kiln has a capacity of 12 cords and uses natural gas for heat.

Kiln-Direct offers kilns for drying lumber, heat-treating pallets and lumber, and heat treating and drying firewood. The company offers three models of varying capacities for drying firewood or heating it to eliminate pests. All models can be heated with wood or gas.

It also offers an automated system to feed fuel wood to the heating system. The kilns are designed for firewood to be loaded in metal baskets.

In order to be able to get a share of the market and distinguish himself from competitors, Dan knew his business would have to put a high priority on product quality. “We knew we were new and we had to turn out a very consistent and quality product.” There had to be a ‘zero tolerance’ for any customer questions or concerns about quality. “You just can’t risk that…We knew we had to start out that way. We couldn’t progress to get there. We had to start that way.”

In his planning, Dan did not take into account one thing: the unexpected sharp increase in inflation in 2021. “We had no idea we were going to face these kinds of inflation rates,” he said. Firewood is not a high margin business, and the rising inflation fueled increasing operating costs. “Everything went up immensely – packaging, timber, fuel, everything.”

Battling the inflationary costs, Dan has put renewed focus on efficiency. “We have to be more efficient than previously thought in order to be more profitable.”

“We’re so new at this,” he added, “we’re still working through a lot of the start-up. Getting production to where it needs to be.”

The pandemic has challenged his business, just like so many others. In particular, it has been important to maintain adequate space between workers operating the Wood-Paker.

“We worked around it pretty well,” said Dan. “We had an event here and there, but we’ve kept safe…It’s been a challenge.” The biggest challenge, he said, was the unforeseen spike in inflation in 2021.

Devastating tornadoes pummeled western Kentucky in early December. Although Mayfield, one of the worst hit communities, is about 180 miles west, a small twister caused considerable damage in the Horse Cave community, according to Dan. Fortunately for his company, the only damage was to two overhead doors to the warehouse that were blown out. As Dan talked by phone from his office, he looked out the window. “Almost every building I see is missing part of the roof,” he said.”

Dan has a farm and raises beef cattle and “a few horses.” His other hobbies are hunting, training his German Shorthaired Pointer, Molly, fishing, chainsaw carving, and running, including running in marathons and ultra-marathons.

Horse Cave Hardwood is a member of the Kentucky Forest Industry Association. Dan is optimistic about his company going forward. “I enjoy it a lot. I probably enjoy this as much as anything I’ve done.”

“A lot of our firewood is used in backyards, for recreational use, camping, and so on,” observed Dan. “I think that during the unfortunate circumstances of the pandemic, people reconnected with a lot of those types of activities, and that’s driven sales. People learned those activities are good for you. They’re rewarding. They’re family-oriented. And I think they’ll continue. I’m hoping the pandemic doesn’t continue, but the reconnection with family and the outdoors does.”

“I have some great people working here,” said Dan. “I think the future is going to be good.” 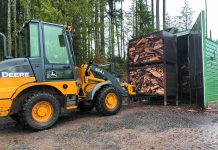