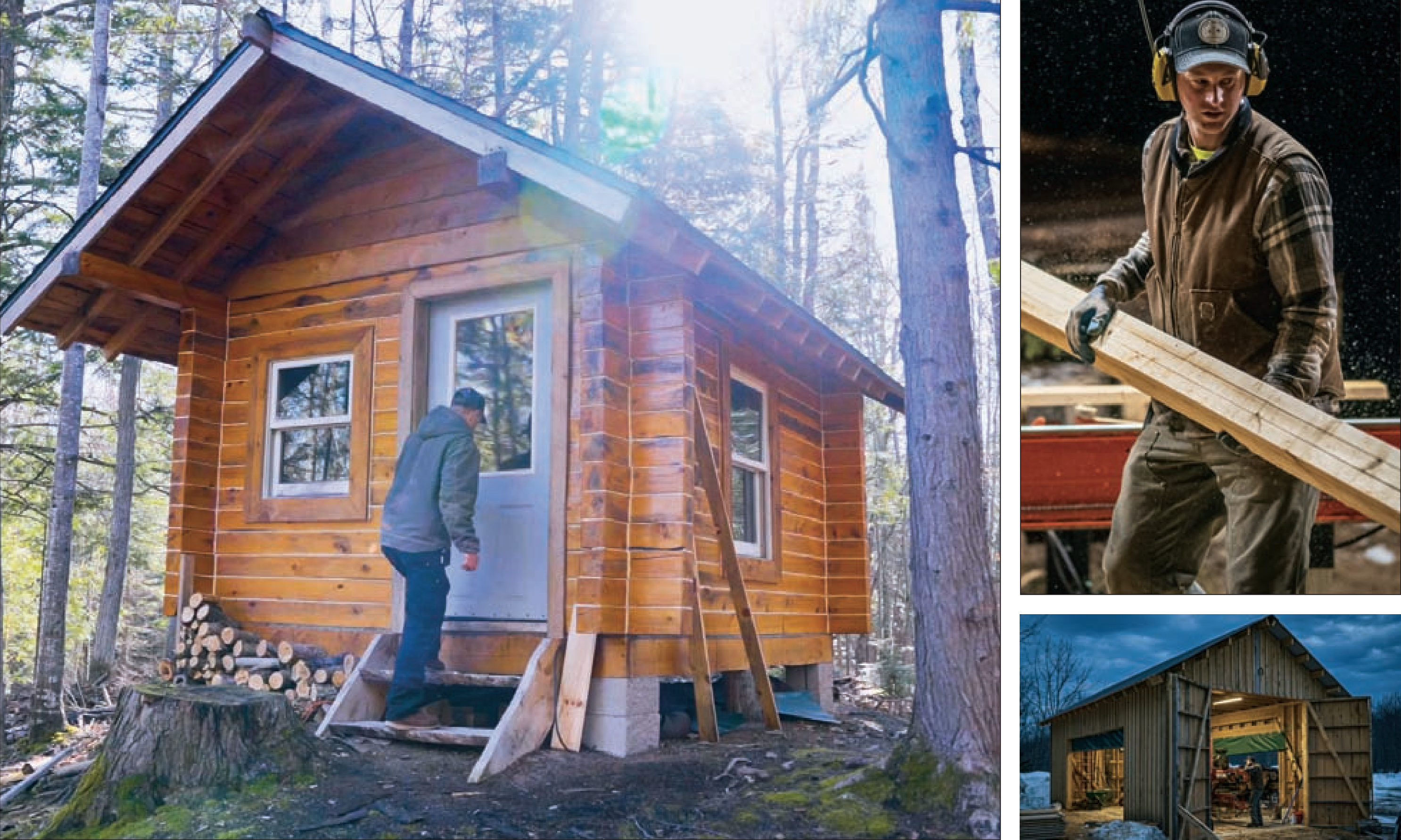 Steve Kesti, the owner of Backwoods Lumber located in the Upper Peninsula Recalls first being interested in woodworking as far back as childhood. “Ever since I was a kid, I always wanted to build a cabin in the woods,” said Steve. Carpentry continued to play a role in his life while growing up. His father was a carpenter, and after taking a carpentry class in high school, Steve followed in his father’s footsteps becoming a carpenter himself.

“I worked my way up until, eventually, I was running jobs and building houses for other people,” said Steve. In addition to his building expertise, Steve makes time for his other calling of volunteer firefighting.

After purchasing property in the Upper Peninsula, Steve realized he had the perfect opportunity to make his childhood dream come true. “I looked around at all my trees and decided I was going to build that cabin and fulfill that dream,” said Steve.

At the time, Steve only had a chainsaw mill, and shares that the cabin took the whole summer to build. Nonetheless, the cabin build was a success. “People would come and look at it and would say ‘Oh, you should build these for a living,’” said Steve. At that time, Steve realized that he could start a business building cabins and make dreams come true for others. However, he needed to upgrade his chainsaw mill to increase production, yield, and efficiency in milling. Having a long-time interest in Wood-Mizer, Steve made the decision to buy a Wood-Mizer LT40 Hydraulic portable sawmill to jump start his business. The cabin business represented a career move that perfectly suited Steve’s motivations at the time. “I could work from home right here in the backyard, and people can come pick up their lumber and talk,” said Steve. “They see the kids and they like that when they are buying something, it is going to the little guy with a family.” In addition to the cabin business, Steve began to expand his business into cedar products, adding a Wood-Mizer MP260 planer/moulder to his operation to be able to make finished planed and profiled boards. The MP260 planes and moulds boards on all four sides at once for making flooring, paneling, trim, and more. Steve relies on his MP260 to make tongue and groove boards and other finished products beyond rough sawn lumber. The first year he milled cedar, he cut what he thought would be enough to make it through the winter, but his inventory only lasted until January. The next year, he cut twice as much, but that batch lasted only until October. “It’s been selling as fast as I can get it run through the planer,” said Steve.

Steve has been able to enjoy the versatility that his portable sawmill offers. Along with the cabins and cedar products, Steve has been able to branch out to all kinds of woodworking projects. He has found success building saunas and related products, including benches, chairs, mats, all with lumber from off the sawmill. However, it’s not all just business. Steve has also been able to enjoy his sawmill for a variety of personal projects, including chicken coops, siding for new buildings, and sheds on his property. In the heavily forested region of the Upper Peninsula, the possibilities are endless for Steve with his portable
sawmill. To keep the sawmill running as much as possible, Steve goes through his fair share of sawmill blades, leading to the purchase of a Wood-Mizer BMS250 bandsaw blade sharpener. “I run Wood-Mizer blades. I can just have about 30 blades on hand and, as they’re dull, I just sharpen them every night when I’m done sawing,” said Steve. “That really helps, having my own sharpening equipment. I just tailor them to my needs.” With the BMS250 bandsaw blade sharpener, Steve keeps his operation running as smooth as possible.

Another benefit that Steve has found with the purchase of his portable sawmill is becoming a member of the Wood-Mizer Pro Sawyer Network. The Pro Sawyer Network connects customers to local sawmills who might be able to fulfill their sawmilling needs. Due to his location in the Upper Peninsula, Steve was initially skeptical. “Being up in the sticks up here, I didn’t think it was going to work for me,” said Steve. “But I’ve been surprised, there are people that have contacted me. When people think of portable sawmilling, they think of Wood-Mizer.”

Sharing his favorite aspects of his LT40 hydraulic portable sawmill, Steve says that the portability has been of great convenience to him. The hydraulic log handling is also popular with his customers. “You can just roll your logs right onto the log lifter,” said Steve. “Lifts them right onto the machine. The customers really like that.”

Between the ability to grow Backwoods Lumber from right in his backyard, and the satisfaction of completing personal projects around the property, the lifelong woodworker is happy with his investment in his portable sawmill and other woodworking equipment. “If somebody asked me if I would recommend Wood-Mizer, I would say absolutely,” said Steve.

“It’s been wonderful. Fun to cut on, and it works really good for me.”

“I could work from home right here in
the backyard, and people can come pick
up their lumber and talk. They see the
kids and they like that when they are
buying something, it is going to the little
guy with a family.”
—Steve Kesti

Subscribe to Wood-Mizer on YouTube to hear from other Wood-Mizer owners around the world and see portable sawmills in action!