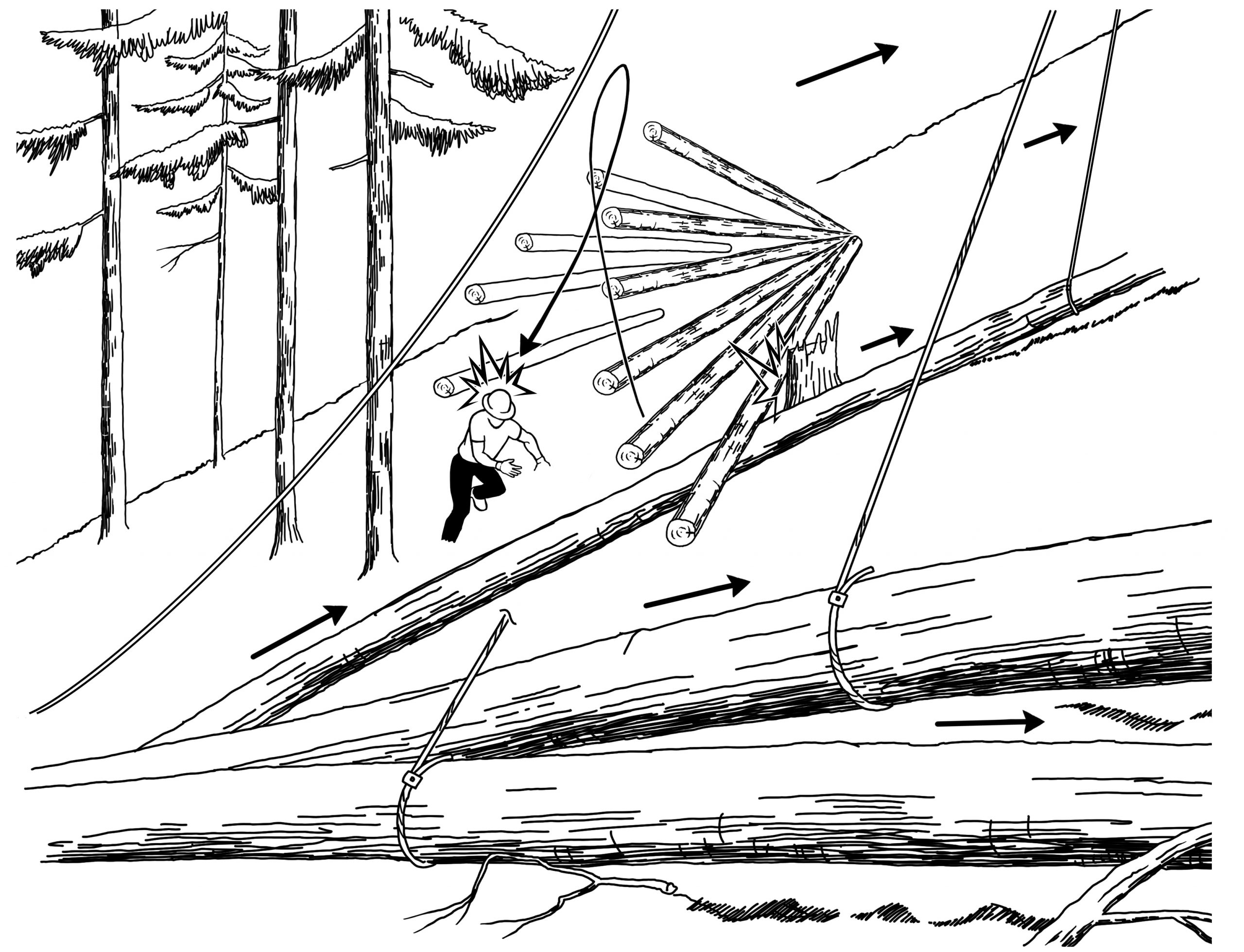 On a fall day in the Pacific Northwest, a cable yarding crew was working on a new thinning unit. The crew consisted of the hook tender, rigging slinger (the victim), and yarder engineer. They had just moved their yarder into the unit, rigged it up, and started logging the first corridor. The other support equipment, such as the shovel and processor, were still being transported when the crew started logging. The crew continued to log until the chute (the area in front of the yarder) became full, and they could not fit any more logs on the landing without the assistance of the shovel.

The experience level of the victim is unknown.

Each man had his own set of four chokers they were setting on opposite sides of the skyline. The hook tender sent his last turn to the landing and headed up to help on the landing. When the rigging came back again, the victim attempted to hook up his chokers to the end of the drop line, but he could not quite reach his last choker to get it onto the hook. The victim walked out ahead of the turn and gave the signal to the yarder to run it ahead so he could reach the last choker. Located near the turn that the victim had successfully attached to the skyline was a small log that was not choked. This small log was approximately 47 feet long and nine inches across the butt. This small log was laying cross lead (perpendicular) of the turn that was being sent (moved towards the landing) and was located on the side of the skyline behind a large rotten stump.

In the process of moving the turn forward towards the landing so the victim could attach his additional choker, the small log was scooped up by the turn, pressing it against the large rotten stump. The small log then jumped up over the stump and swung around towards the victim. There were several standing trees in the vicinity, and it was assumed that the victim felt he would be protected by the standing trees. The small log came around and struck the victim on the right side of his head with such force that it smashed in the side of his hard hat and slammed him to the ground, resulting in a severe head injury.

Prior to the incident, the yarder engineer stated that he heard three whistles given by the victim, signaling him to go ahead on the skidding line. The yarder engineer stated that he started ahead on the skidding line, then received one quick whistle indicating the victim wanted the rigging to stop. It is assumed that this stop was requested so that the victim could then hook the last one of his chokers to the skyline. After a while, the yarder engineer got no more commands and became worried about the victim. He called out to the victim on the handheld radio but got no response. The yarder engineer and hook tender became worried when the victim would not answer and went down the hill to find him. The hook tender was the first person to get to the victim and found him unresponsive. The company’s emergency medical plan was immediately put into action, and within 20-30 minutes, EMTs were onsite and immediately called Life Flight and had the victim airlifted to a hospital.

The victim was hospitalized with massive head trauma but was expected to survive. It is unknown if he was able to return to work.

Choker setters must move to the side and behind all logs in the turn and be in the clear before the go-ahead signal is given.