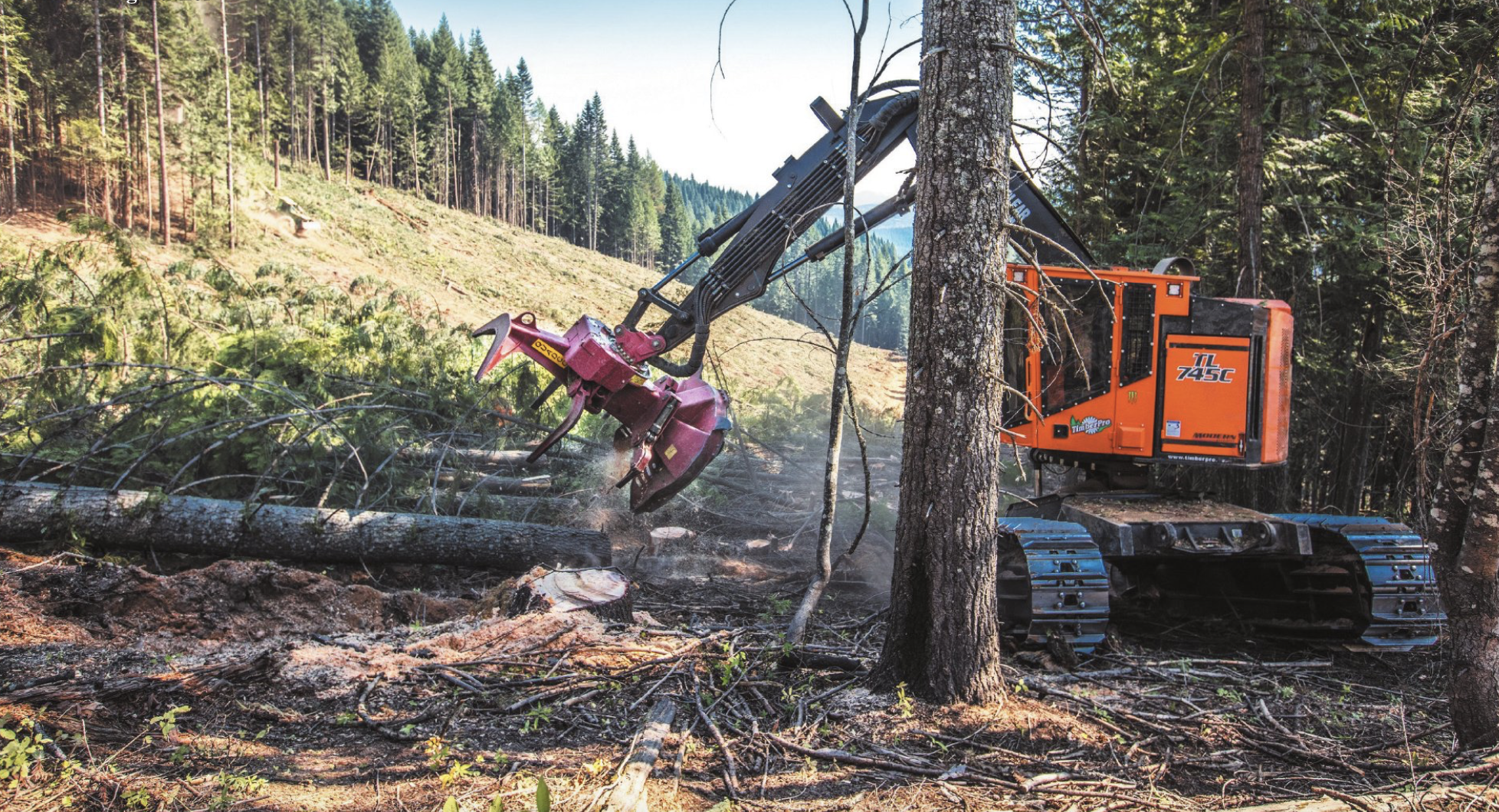 ST. MARIES, Idaho — Bob Danielson has been steadily growing his logging business, boosted in part by the growth spurt in Idaho’s population. In the process, Danielson Logging has come to rely on Quadco attachments for felling timber. Bob has expanded his business into other areas, too.

Bob came from a logging family — both his father and paternal grandfather were loggers.

When he was 20 he owned and operated a cedar sawmill that produced cedar shakes for roofing. He ran the mill for about 10 years and had as many as 12-15 employees. “It was good business experience doing that,” he recalled. “That helped me when I started logging.”

He began doing some salvage logging, working by himself, in 1988 while he still owned the sawmill. He felled trees by hand with a chainsaw and used a Cat skidder to get the logs out of the woods.

After a year he began hiring employees and adding equipment, and within a couple of years he made the change to mechanical logging. He added two cut-to-length machines, a harvester and a forwarder, to perform thins for a customer and maintained a cut-to-length crew for 10 years along with tree-length logging operations.

Bob has an affiliated business that buys timber land and other land, which he has been doing for 25-30 years, and developing some land.

Although he harvests some timber off his own land, he mainly contracts to harvest timber for Inland Paper, Stimson Lumber, and PotlatchDeltic. Stimson operates stud mills while PotlatchDeltic produces plywood and dimension lumber. Inland Paper, which alone owns about 100,000 acres, sells the saw logs to lumber mills and buys chips for a pulp and newsprint mill in Spokane. All the mills Bob supplies are within 50-100 miles. His company has three logging trucks, so must hauling is done by trucking contractors.

Besides the logging crews, the company operates two crews that stay busy building logging roads. The company has three gravel pits where it crushes rock, which is used in the road-building operations and also is sold to other businesses that use crushed stone for building roads.

“We’ve got snow on jobs right now,” Bob said when he was interviewed in late October. “We’re supposed to get a foot this weekend. It could be three to four feet easily in the weeks ahead.”

If conditions deteriorate because of heavy snow, crews can move to jobs at lower elevation. “Sometimes snow blows and drifts over the roads,” noted Bob.

However, crews will work through the winter. Spring break-up comes by the end of February and early March, and the company will shut down for 6-8 weeks.

One logging crew is equipped with a TimberPro 745 and Quadco hot saw attachment, a John Deere 756 shovel, and a John Deere 736 shovel with a Log Max 10000 XT for processing the trees. The crew occasionally also uses another shovel and a skidder.

The second crew is similarly equipped with a TimberPro 745 and Quadco hot saw, a shovel and a skidder, and two processors.

The third crew is equipped for operations on steel slopes. A winch system is tethered to a TimberPro 765 with a SouthStar 750 felling head. A John Deere 736 is used as a yoder with a winch assist system from Summit Attachments & Machinery. The crew also is equipped with a shovel and grapple skidder as needed.

Slash usually is piled and burned. If the job is close to a cogeneration plant, sometimes the customer will hire a contractor to grind the material for boiler fuel. “But the market usually doesn’t dictate that,” said Bob. The material is either piled and burned or left to rot and return nutrients to the soil.

One of the jobs the company currently is working on is a stewardship contract for the U.S. Forest Service, a 10-year timber sale in the St. Joe National Forest. Two crews and eight employees are working on the job. One runs a TimberPro 745 with Quadco hot saw and shovels and skids the logs to a landing where a John Deere 375 with a Log Max 10000 processes them. The second crew is using the summit-tethered harvester on steep terrain, using a combination of shovel, skidder and yarding system to get the logs to the landing.

Bob has been using Quadco felling attachments for more than 20 years. He used Quadco felling heads with bar saws in the early 1990s. A few years later the company transitioned to hot saws “and we never looked back,” he said.

“We have a lot of small timber,” he said, “understory that has to be cut out of the way. We cut a lot of small pulp. The Quadco hot saw can cut it faster and more efficiently.”

Not only that, the Quadco hot saws are durable. “You can go through two bunchers and keep the same Quadco,” noted Bob. “The Quadco will outlast” other felling heads.

Canadian-based Quadco manufactures hot saws, drum mowers, processors, and cutting tools. The Quadco Group includes Quadco, Southstar and Log Max, brands that offer a combined selection of over 50 forestry attachments. With a variety of products backed by strong support, Quadco is building a stronger presence within the logging industry.

Quadco offers its B series felling attachments for large diameter timber and the C series heads for accumulating smaller trees. The B series attachments feature an arms-down design, and the arms are separated or offset for better tree control and maximum holding power. Both the grab arms and accumulator arms are powered by two cylinders. The company offers a number of models in each series for various cutting capacities.

With feedback from loggers, Quadco has developed products that have been proven in the toughest conditions and are known for superior reliability and durability.

Headquartered near Montreal, Quadco has manufacturing operations in Canada and has facilities for parts and service in Lexington, South Carolina, and Kalama, Washington.

(For more information about Quadco products, visit the company’s website at www.quadco.com, email info@quadco.com, or call (800) 668-3340.)

Over the years Bob has made machinery purchases from Pape Machinery, which represents John Deere and has a dealership in Spokane, Washington. He also has purchased Cat equipment from Western States Cat, which has several locations in Idaho as well as other states.

Bob has been heavily involved in overseeing his company’s logging operations and preparing bids for jobs, but earlier this year he hired a forester to take on most of that responsibility so he can devote more time to managing the company’s crush rock business.

“I’ve needed a forester for a long time.”

Bob’s wife, Sally, is the company’s bookkeeper. He has an affiliated property business, and a daughter, Leslie, sells real estate for that company. The property business has developed some housing projects and currently has three projects underway.

In his free time Bob enjoys going four-wheeling with his family, and boating, and fishing. He also has been and continues to be active in trade associations. He has been a member of the Intermountain Logging Conference for over 20 years and served as president in 2014. He also is a member of Associated Logging Contractors, a trade association of Idaho loggers; he has served as co-chair of the organization’s board of directors as well as chairing several committees.

Treating employees well, in compensation and benefits, is important to Bob, and he believes it pays dividends for his business. His company offers a 401(k) retirement plan and matches employee contributions up to 4 percent. The business also pays the group health insurance premium for employees and their families. And he pays higher wages than other contractors, he said.

“Paying your people well and having good benefits for them pays,” said Bob, “because when you have the best equipment out there, if you don’t have good crews out there and taking care of the ground, you’re behind. We pay well and have good employees, and they stick around.” New, young employees receive training, and the company sends them to the Idaho Pro-Logger program for timber harvesting. “It helps keep us in the lead on what we’re doing,” said Bob.

“We have some employees who have been with us for 20-30 years, so we take good care of our people,” said Bob. “They help take care of our business, and we keep growing every year.

“It’s important to have the best equipment to operate efficiently, but you can’t do that without good people. And we have a lot of good people here. I can’t say enough about the people we have.”
Danielson Logging was one of the first logging companies in Idaho to invest in a tethered timber harvesting system, according to Bob — using a winch at the summit to enable a track harvester to work on steep inclines. “A few more are doing it now,” he said, although there is only one other logging contractor in the immediate area with a similar system. “We’re doing a lot of tethering and mechanical cutting…That seems to be putting us ahead of the curve.”

Despite the pandemic of 2020, it’s been a good year for business, observed Bob. “This year’s been probably one of our best years.” Plenty of wood and work has been available, and markets are good. “It’s been full steam ahead.”