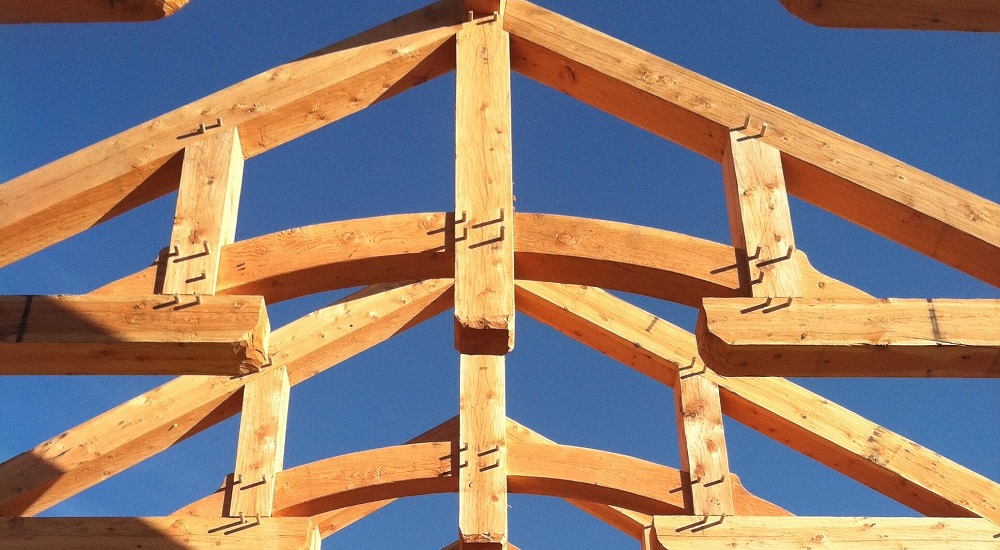 RIDGWAY, Colorado — Phil Gould established himself solidly as a contractor building niche timber frame homes, but he has a new business strategy he hopes will set him up as a supplier to building contractors. And he’ll be doing it with the aid of a Select Sawmill band mill.

Phil, 54, makes his home in Ridgway, Colorado. He is a native of Arizona, although he left at age 17 because it was “too hot” and moved to Washington. He ended up returning and earning a bachelor’s degree from Northern Arizona University with a major in photography and industrial printing and a minor in business.

Phil did construction work while he was in high school and college and gravitated back to it when he moved to Colorado. He actually moved to Vail to help his brother build a home in Eagle in 1993. There was a lot of construction work going on in the region, and after helping his brother he found work and kept moving from one job to another.

Ridgway is in the southwest corner of Colorado, about 90 miles southeast of Grand Junction. It is a community of only about 924 people, according to the 2010 Census. It is situated in the Uncompahgre Valley at an elevation of about 7,000 feet.

Ridgway and the surrounding area were the setting for the 1969 western movie True Grit, starring John Wayne and Glen Campbell. A number of notable people have established second homes in the area, including fashion designer Ralph Lauren and actor Dennis Weaver.

In the specialty of timber frame construction and trim, there were a lot of contractors building these kind of high-end second homes for the well to do, but not many with much depth of experience, according to Phil. “That’s the part I really enjoyed, so I kept doing it.” Eventually he set himself up with a log yard and machinery to mill timber frame components.

The kind of components that people want for a custom timber frame home cannot be purchased at a lumber yard or a ‘big box’ home improvement store, noted Phil. They have to be custom-made, and, depending on what the customer wants and the kind of ‘look’ he wants for the timber frame, the components may need to be finished with hand tools.

Phil launched his own business, Handcrafted Log and Timber, in 2000. Initially he invested in a small portable thin-kerf band sawmill to cut timbers, the kind of portable sawmill that is manually operated. That first mill was used mainly to cut components for homes although he also cut material for stair treads, fireplace mantles, and other items.

A few years later he added a ‘swing mill’ portable sawmill, the kind that uses a circular blade to saw the log. He used it to cut more specialty components for posts and beams in timber frame homes. Phil also liked the finished texture the circular saw blade gave the components.

Soon after that Phil added another portable thin-kerf band mill that had the added benefit of hydraulic log loading and handling. It was his sawmill of choice until 2017, when he invested in a Select Sawmill Model 4221 sawmill.

Within a few years of launching his business, he had 30 employees and was building 10 houses a year. When the economy tanked in 2008, however, Phil downsized and sold off everything except his mill and a forklift. Now he uses subcontractors to do all the actual framing and assembly work; Phil’s business is logging the trees and cutting them on a sawmill to make the components for the frame.

“Since I downsized, I had to do more with less people,” explained Phil. “I wanted to be able to saw a package (of components) quickly and efficiently.” With the Select Sawmill machine, he can cut in one day what it would take him a week to accomplish with another thin-kerf portable sawmill. “It has been unbelievably life-changing and time-saving,” he said.

The Select Sawmill Model 4221 runs a 6-inch double-cut blade, so the mill cuts as the saw head travels in both directions. Powered by a John Deere 115 hp diesel engine, the Select Sawmill has more than twice the horsepower of Phil’s previous mill that had hydraulics. “I need to be able to turn a log with a 20-inch top,” said Phil, and not stopping the sawmill to get on a forklift to help move or handle the log. The Select Sawmill has all the muscle he needs to work quickly and efficiently with large logs. (The Model 4221 can handle logs up to 42 inches in diameter and 22 feet long.)

Phil actually researched sawmills for several years before making a buying decision. He narrowed down his options to Select Sawmill and a manufacturer of a circular sawmill. What tipped the scales in favor of Select Sawmill, said Phil, was its speed, precision, and log handling capability. He visited a Select Sawmill customer elsewhere in Colorado and watched the machine in operation a couple of times in his process of researching equipment.

Phil has been more than pleased with his decision. “It actually exceeded my expectations by every measure,” he said. Comparing it to his previous sawmill is like “comparing a Ferrari to a 1971 Volkswagen bus,” he said.

Since he has operated sawmills for a number of years, Phil did not feel the necessity of having Select Sawmill personnel make an on-site visit to help him set up the mill or to get started operating it. The staff of Select Sawmill has been readily available by phone and email whenever he had a question and have provided excellent support for technical assistance and parts, some of which are off-the-shelf components that can be obtained locally.

The Select Sawmill model 4221 sawmill is a high-output band mill. Running a 6-inch double-cut band blade and sawing in both directions, it can cut up to three feet per second, depending on the application.

Select Sawmill also offers the model 3620 with many of the same features but designed for milling smaller logs. The company also offers ancillary equipment, including a debarker, edger, trim saws and chop saws, live decks and conveyors, and saw blades and blade sharpening equipment.

Select Sawmill manufactures sawmills and equipment for small and mid-size commercial sawmill businesses. It has been manufacturing high production sawmills and machinery since 1997 and has customers in Canada, the U.S., Mexico, Australia, and countries in Africa, Europe, South America, and Asia. The company is located in Plantagenet, Ontario, Canada, less than 40 miles east of Ottawa.

“I’m super impressed with that sawmill,” said Phil. “If I had known 15 years ago how much time and money I could have saved by not even spending twice as much on a sawmill — it’s pretty mind blowing. I would highly recommend every timber frame company out there ditch their thin-kerf band mill and get one.”

Phil has been doing logging on private land since the advent of Ips beetle infestation in early 2000. He fells trees by hand and uses a farm tractor with a Hudson cable skidder winch attachment and a log trailer made by Palms, an Estonia company whose products are distributed by Canadian-based Hakmet Forestry.

Virtually all the logs that Phil uses are from trees that were killed by beetles, notably the Ips or ‘engraver beetle,’ which feeds on pine and spruce, developing under the bark and tunneling through the tree. Prolonged drought stress can contribute to infestation by the Ips beetle. The insect has been killing off lodgepole pine, Engelmann spruce, and Douglas fir. There is still plenty of standing beetle-kill timber in the region.

Phil buys standing timber, and he buys logs from other logging contractors from time to time, depending on his needs. He also contracts his logging services to private landowners who want to rid their property of beetle-infested timber. He also occasionally does logging for government fire mitigation projects.

Timber framing and log building construction often are the only applications to use this timber, according to Phil, because as the logs dry the checks get too big and deep to cut into lumber at industrial sawmills. However, the wood is very suitable for timber framing and log buildings, and removing the beetle-killed timber from the forest will allow it to regrow again.

The fact that the wood is dry actually makes it attractive for Phil’s craft of cutting timber frame components. “You want the parts to be dry,” he said, when all the joints are cut and the components are assembled because the wood will have less shrinkage and movement.

Slabs from the sawmill operations are bundled and sold for firewood. Scrap 1x material is used for board and batten siding.

Phil formed a partnership this summer with Derek Smith and Jeff Bunnell. They are establishing a logging contracting and sawmill business, Ironwood Group. The new company has purchased two John Deere cut-to-length logging machines, a 1270G harvester and a 1910G forwarder, and the three partners will take turns operating the machines. For the sawmill, the partners have leased a building in Delores, about 100 miles further southwest, and have purchased a used Cleereman head saw that will be installed. Phil, who said the business also plans to invest in a dry kiln, expects the sawmill will be operating by September or October. The mill will produce 1x and 2x lumber, siding, and tongue and groove lumber products for commodities markets. It also will be equipped to produce veneer.

The sawmill also will give Phil the capability to offer other products to home builders in addition to timber frame components. His business strategy is to phase himself out of home construction and to focus on logging and sawmilling, while keeping relationships with the contractors who build timber frame homes and would buy the components from him.

“We take it right from the log to the finished timber frame,” said Phil, who is a member of the Timber Framers Guild, an educational membership association dedicated to the craft of timber framing. “I don’t think many people do that.” He draws plans on Sketchup 3-D design software, frequently working with architects or contractors as well as the homeowner. “A lot of times it’s a collaboration.”

Some customers want the timbers to look as if they were cut by hand. For those customers, Phil finishes the sawn timbers with an adze or other hand tools to give them that rugged, hand-hewn look.

In recent years Phil has been doing about four buildings a year — homes, barns, and cabins. He also does some miscellaneous custom sawmilling. Although he has a website, virtually all of his business comes via word-of-mouth.

When he was building homes, Phil’s business could take him to other states, including Mississippi, Texas and California. He made the components for houses for customers in those states, shipped them to the location, then traveled to the site to assemble them in a week or two. He can still do jobs like that if he chooses, but he works mainly for customers building homes in Colorado.

Phil is married, and he and his wife have three children. He has a very busy work schedule, but in his free time he enjoys mountain biking in the summer and skiing in winter, particularly backcountry skiing.