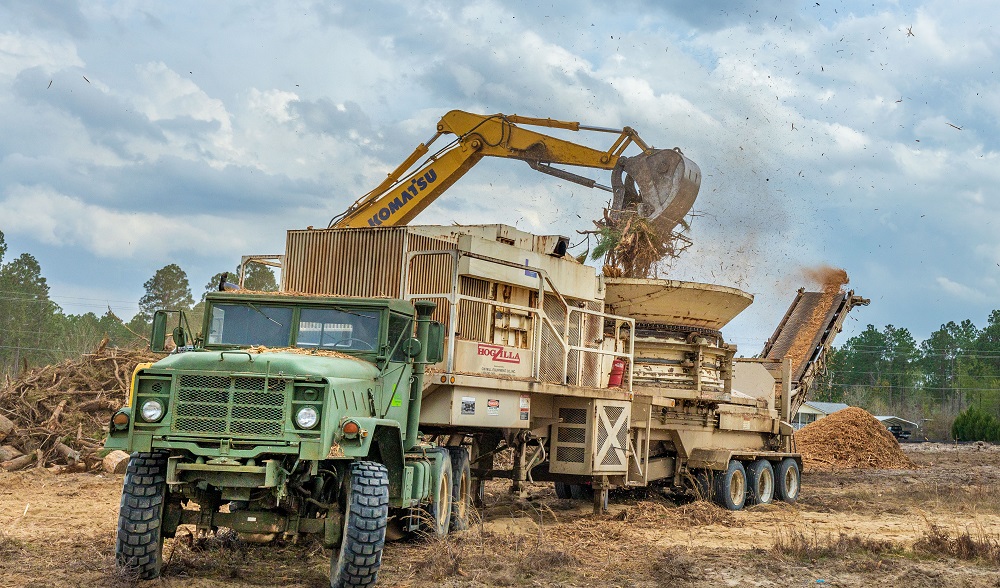 Relationships. They are the essence of business. In a nugget, that’s the philosophy of Jimmy Leitzsey, owner of Leitzsey Timber, LLC.

Jimmy’s outlook has been fortified by experience. He has always believed in the power of relationships, he explained. Getting to know the other person – whether a vendor, a customer, a competitor or a neighbor – eases interactions and forms lasting ties.

The strength of those ties can carry everyone over the rough spots. Jimmy had full evidence of the strength of relationships he had established when the recession of 2008 and 2009 ended.

Having taken a pause from running a land clearing business because of the depth of the low economy, Jimmy was gratified by the customers who returned to him when he started his new company, Leitzsey Timber five years ago.

Leitzsey Timber has two branches. One is dedicated to logging and the other to land clearing. Because all fiber is merchandized to the fullest extent, the logging crew sometimes works in front of the land-clearing crew, explained Jimmy.

“We try to utilize anything we can,” he said, pointing to the focus the company puts on extracting the most from fiber. His company works closely with Timber Resources, Inc. in Newberry, S.C. – a forestry consulting company that helps with buying and selling.

As it happens, Timber Resources is operated by two of Leitzsey’s forester friends. The friendships formed with the men when they were still in high school. Old ties and new ties are both important to Jimmy.

“Relationships and teamwork are really a big thing,” he said. They give strength during “good times and bad times” because they make it possible to build “trust with clients” and coupled with “being persistent,” the bonds fortify a company.

When Jimmy launched Leitzsey Timber, he knew exactly which machine he wanted for the grinding component of the operation: a HogZilla®. In the early years of this millennium, he had used HogZilla tracked machines at his former company. HogZilla machines get the highest marks from him.

“We grind everything from the biggest stumps to the smallest brush,” said Jimmy. For that reason alone, he requires both maximum strength and maximum flexibility in a grinder.
The HogZilla Jimmy currently has in use is a rubber tire machine. He bought it used in 2018.

HogZilla machines are made by CW Mill Equipment Co., Inc., which is based in Sabetha, Kan. The company has been manufacturing electric- and diesel-powered grinders for more than four decades.

Jimmy said “the productivity” of the HogZilla coupled with “the customer service” from CW Mill make a great combination. The machine has a diesel Cat engine.

Because there is such variation in the type of material fed to the HogZilla, Jimmy did not have a production figure. Yet there are some impressive production figures worth noting to illustrate capability.

Jimmy is considering either upgrading to a newer machine, or possibly adding a second grinder, and has the HogZilla HTC-1464T tracked tub grinder in view. For stumps and logs, the production rate of the HTC-1464T is between 100 and 150 tons per hour. Put more brush or all brush in the mix and the production jumps to as much as 200 tons per hour. The machine is so powerful that it can grind pallet and construction waste at a rate of 80 to 120 tons per hour.

Over the years of his experience with HogZilla grinders, Jimmy has worked closely with Tim Wenger, the vice president and sales manager at CW. Brothers Tim Wenger and John Wenger, president, own CW and Tim has primary responsibility for the grinder portion of the company.

Tim understands the needs of Leitzsey Timber, and that is important to Jimmy. “Tim, anytime he’s close by, comes to our jobsite,” said Jimmy.

“I keep going back to relationships,” said Jimmy. The HogZilla grinder meets his needs and expectations, and the team at CW gives him great support.

“Tim, to be able to call him for help and advice” is a big positive, said Jimmy. Tim also understands that not all customers may want to buy a new machine. CW works to achieve the best fit for customers whether they are interested in new or used grinders.

“Sixty to 70 percent” of the material fed to the HogZilla is pine, said Jimmy. The remainder is mixed hardwoods.

The logging crew at Leitzsey Timber uses all Tigercat equipment – three pieces. “On the timber side of the business, Kevin Wright has been very instrumental in helping us get the most out of our Tigercat equipment,” said Jimmy. Kevin is branch manager at Tidewater Equipment Company in Newberry, S.C. and always offers good advice for how to get maximum production out of Tigercat’s equipment.

The land-clearing crew uses primarily Komatsu and Cat dozers and excavators All felling and clearing are mechanized to the fullest extent possible with chain saws being used rarely. The dimensions of the forest products industry are understood well by Jimmy. “I grew up on a farm – beef,” said Jimmy. But while still a teenager, he began logging.

“My dad started in the timber business in 1980 when I was only 12 and I started helping in my free time,” Jimmy said.

He explained that his father’s business was mechanized “but much more labor intensive” than mechanized logging is now. “We used chain saws a lot more.”

The business that Jimmy’s father owned followed a natural progression from logging to land clearing, he explained. And when Jimmy moved to launching a business of his own, he combined the two endeavors.

Much of the work that Jimmy’s company does is land clearing for new subdivisions. The team works within a 50-mile radius of its home base in Columbia.

The capital of South Carolina, Columbia is part of Richland County in the center of the state. It has approximately 134,000 residents, and since 1990, it has grown by almost 40 percent.

Jimmy has deep appreciation of all parts of the wood products industry. Although he never worked on the sawmill side of the industry, his father did.

“Being environmentally friendly is really, really important,” said Jimmy. The emphasis, he explained, must be on doing the most work in the least invasive way.

Customers react very positively to a commitment to tread lightly in the environment, he said. It’s a “plus” that reinforces the commitment.

Much of the ground product the HogZilla produces at land clearing sites heads to plants that use it for boiler fuel, said Jimmy. “We move a little for mulch.” That’s all bulk mulch.
Whatever Jimmy’s decision about a new tracked grinder, he is sure he will stay with HogZilla. He will have many options, given CW now makes more than 20 models – with tub and horizontal, as well as rubber tire and track options.

Because CW can customize a grinder to match a buyer’s focus, the buyer can be sure an optimal solution to grinding is being obtained. Jimmy said it’s important to him that Tim and the team at CW essentially build “one grinder at a time” – given the specificity to a particular customer.

“Tim doesn’t build a lot of machines, but he builds them bigger and better,” Jimmy stated.

The HogZilla is a powerful machine. CW has worked to combine that power with reliability by innovative components, such as the torque converter drive.

Here’s how it works: Additional reaction torque is added by rerouting of hydraulic fluid against turbine blades whenever load on the hammermill increases. Because the torque converter fluid absorbs shock loads and torsional vibrations from the hammermill, it affords protection to the engine.

Dating to 1993, the torque converter is a signature component at CW. And yes, the name HogZilla nods to the standard hog-mill of the wood products industry and the cult-classic reptile.

Having owned several grinders, Jimmy said that he knows – as all grinder owners should – scrupulous routine maintenance is a must. “Maintenance must be performed,” he said. “Grinders are very high maintenance machines.”

Leitzsey Timber operates with five employees. Having started the company so recently, Jimmy devotes a great portion of his time to it. The free time he has is

focused on his young son, he said.