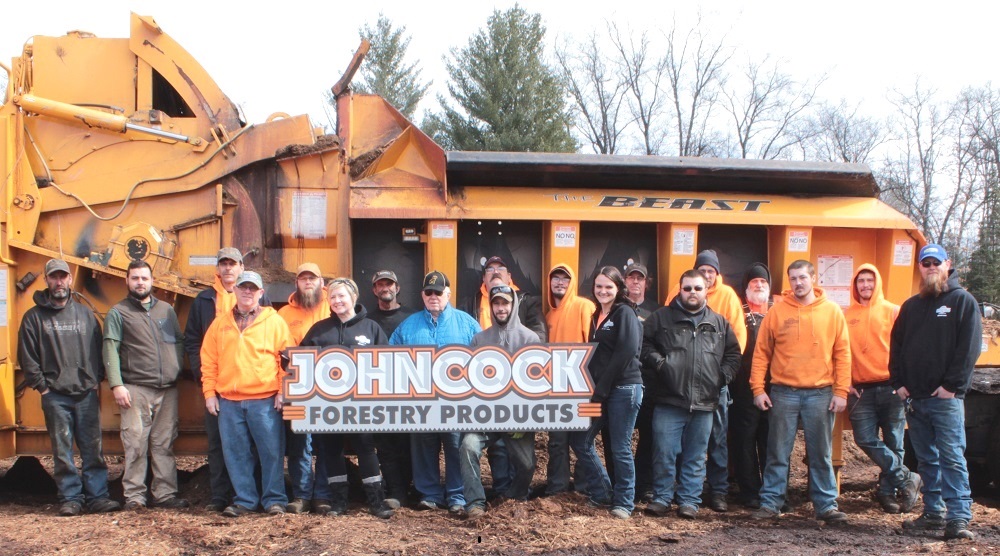 It’s spring and the mulch season is in full swing at Johncock Forestry Products (JFP), run by Gordon Johncock, former race car champion and two-time winner of the Indianapolis 500. Johncock has led a very interesting life and forestry businesses have been a part of his life for many decades.

Right now he’s busy with the mulch season. Mulch product contributes almost one-fifth to the total sales at his company. Lumber for pallet manufacturers, wood chips for the furniture industry, firewood, and sawdust for animal bedding are the other four main products at the company.

JFP has seven semi tractors in service: a Mack, two Freightliners, an International and three Kenworths. It also has five trailers with moving floors. These include: two Titan trailers and a Mac trailer, all with Keith Walking Floor® systems; and a Manac trailer and a Great Dane trailer, each equipped with Hallco Live Floor™ systems.

All mulch is sold wholesale. “We deliver to customers in 140-yard walking floor trailers,” said Gordon. “We only sell in bulk, no bagging.”

Twenty-four employees work with Gordon to keep the many components of JFP humming. (Vice President of Finance and Marketing at JFP Valerie Sundberg, was very helpful to us in gathering comments for this article – doing so during the exceptionally busy early March period when mulch production and transport were gearing up to full speed.)

The Beast has been on the equipment roster since 2012, the year that JFP launched its mulch component. It is the first Bandit that Gordon has owned. “Speed” is the quality that he likes most about the grinder, he said.

Gordon said the speed of the Model 4680 definitely got his attention. He noted he was able to grind 140 yards of material – a semi load – in 25 minutes. The power source for The Beast is a 1,050 horsepower Cat diesel engine.

Bandit now offers an even more powerful version of the Beast. It is the Model 4680XP. It has engine options up to 1200 horsepower in addition to a huge – 45-inch by 50-inch – mill opening. The 4680XP is capable of grinding waste wood, storm debris, and even shingles used in recycling for hot-mix asphalt.

At JFP, however, it is virgin wood exclusively that is fed to the 4680. The focus is on producing mulch that harmonizes with the environment. And that includes developing a method of coloring that is environmentally friendly.

The mill at JFP is 30 years old. Gordon purchased the sawmill 10 years ago. The mill had been known as Quigley Lumber since its inception. It was owned by Randy Fournier, a friend of Gordon’s, and Gordon bought it from Randy in 2009 – the name Quigley retained throughout.

Randy nudged Gordon to buy the mill when Gordon was actually trying to retire – for the third time. Gordon was spending a lot of time at Randy’s mill and failing woefully at retirement. The push given, it did not take Gordon long to decide to buy the mill from Randy.

From 2012-2014, Gordon’s mulch business more than doubled each year. In 2014, the sawmill was devastated by a fire. Everything inside the sawmill was burned to the ground. Luckily, The Beast and bark piles did not catch fire. The cash flow from the mulch business, creative products from Greenstone Farm Credit Services, best-in-the-industry customers, and dedicated employees, kept Gordon’s businesses afloat while he worked to rebuild. A fourth try at retirement didn’t even cross Gordon’s mind.

The lumber for pallet manufacturers that leaves the JFP mill accounts for 68 percent of the sales at the company. Wood chips for pressboard paneling and furniture account for 10 percent and sawdust animal bedding two percent. The company also sells some slab firewood for home heating and wood projects.

Sawdust for animal bedding comes from the sawmill. “We sell about 12,000 yards of animal bedding each year, but it is all made from the circular saw blades in our sawmill,” said Gordon.

A strong commitment to the environment informs all facets of the business at JFP. All loggers that supply the company with raw material are local, professional loggers who practice sustainable and responsible logging practices. All wood is harvested in Michigan.

Johncock Forestry Products is located in South Branch, Mich., which has a population of 389. It is part of Ogemaw County in the east-central part of the state, and it’s one of the gateways to the Huron National Forest.

The USDA Forest Service combines the one million acres of national forest between the shores of Lake Huron and the shores of Lake Michigan in the lower peninsula of the state. It refers to the area as the Huron-Manistee National Forests, a unique landscape with prairie remnants, marshlands, dunes, oak savannahs and bogs. The entire area is a magical place in the Wolverine State.

Gordon started a mulch business seven years ago because he wanted to have more control over the price he was getting for his bark. Markets change and being able to keep pace with them in-house affords a great advantage. Currently darker colored mulches are favored by consumers in the area.

“We’re working on a water-activated, fade-resistant premium bark mulch right now that will be the first of its kind in Michigan,” said owner Gordon Johncock.

“It’s a proprietary blend of naturally occurring ingredients. Customers have asked for mulch that is dye-free, but lasts as long as colored mulch. The mulch product we’re testing right now has the following advantages: color doesn’t wash out in the rain; color doesn’t stain your hands or equipment; it’s perfect mulch to put near or under sprinklers and eaves; if the color starts to look dull, just add water; it’s safe for pets and children; it offers better water retention for your plants than dyed mulch; it’s better for the environment, made from 100 percent virgin wood…”

The industriousness that Gordon brings to the day to day is something that has been part of him since he was a child. He started his own farm when he was still a teen. By the time he was in his 20s, he had a sawmill and logging business, Johncock Forestry. And he had begun racing modified stock cars at local speedways. He soon jumped to champ cars.

The knowledge of engines and power that Gordon took from his racing experience is something that makes him an acute appraiser of equipment. In his first Indy race he drove a front-engine car, essentially in its last year at the event, as the transition was made to rear-engine vehicles.

In his own words, “hard work and horsepower” are the two passions that have propelled Gordon since he was a boy. Horses and powered equipment – from horses to tractors to Indy cars – have very much been a part of his life. He suggests it’s not unusual that the 4680 would get his attention, given it is a powerful machine – and one that has lived up to his expectations.

The power built into Bandit equipment is exemplified by the reach of Bandit Industries. The company sells equipment ranging from hand-fed and whole-tree chippers to stump grinders and waste reduction recyclers around the world.

Gordon Enjoys His Life and Work:

Gordon said that he very much enjoys leading Johncock Forestry Products. “Every day there is a different problem to solve,” he said. “There is no such thing as a typical day.”
There’s a fundamental sentiment that carries Gordon through his day. “Our handshake is our word and our reputation is more important than a sale.”

When Gordon takes time away from business, he said he likes to play rummy with his wife, Sue Johncock. With a fondness for the outdoors that began when he was a child growing up on a farm in Hastings, MI, he also relishes the time to watch birds. In 1985, after Gordon’s first retirement from racing, he built a beef cattle farm, which he ultimately sold in 1999.
Gordon said that Sue, who is also his business partner, is the love of his life. And when he found her in 1990, he married her.

Although it is only rarely that Gordon takes time away from his business, he and Sue enjoy visiting family and friends in Florida when they can. At home, they enjoy the company of nine cats.