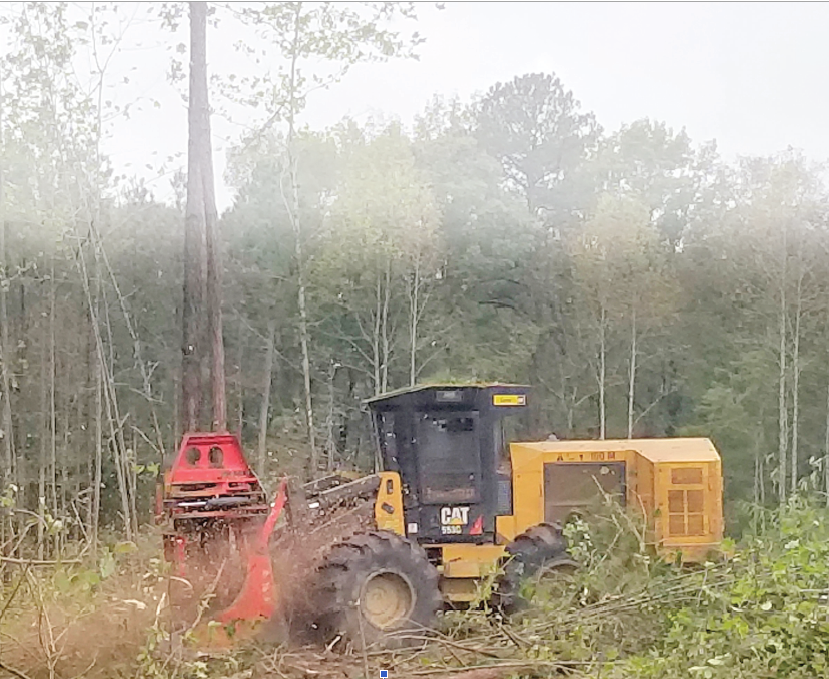 RUTHER GLEN, Virginia — David Knighton is following in his father’s footsteps, and his brother and sister are going along with him. And David already is grooming his son to follow in his.

David and his brother, Tim, and sister, Sandra Hynson, are the owners of J.H. Knighton Lumber, a rough sawmill with its own crews to do timber harvesting, thinning, and whole tree chipping. And Cat® logging machines do the heavy lifting when it comes to felling timber and thinning pine plantations.

The company’s facilities are located in Ruther Glen, a small community almost exactly half-way between Richmond to the south and Fredericksburg to the north, each of which is about 30 miles away. It is just a short distance from I-95, which provides good access north and south.

Knighton Lumber employs just over 40 people in all its operations. About 10-12 work in the sawmill, and the company has seven truck drivers. (“We desperately need more,” said David. “They’re extremely hard to find these days.”) The remaining employees work on the three crews for logging, thinning, and chipping. The company also employs a full-time mechanic and a part-time mechanic; they take care of about 95 percent of any mechanical work the company requires on forestry machines and other equipment.

The business was started by the father of the three siblings, Joe Knighton, who began with a portable sawmill in 1969, buying tracts of timber and moving from tract to tract after cutting the lumber on each one. Joe, now deceased, later added his own logging crew to harvest timber. In the early 1980s he added whole tree chipping operations and also set up the sawmill to operate at a permanent site at its current location. In the early 1990s he added the final piece of the company — a thinning crew.

David attended Virginia Tech for a year before deciding to go to work for his father in 1985. He started by running the whole tree chipper for a wood yard that supplied paper chips for the Chesapeake Corp. (now WestRock) paper mill in West Point. He advanced to managing all the crews in the woods and the timber harvesting operations while his father concentrated on managing the sawmill.

Today David, 52, oversees the sawmill and the logging, thinning, and chipping crews. He also handles sales of wood products. The company forester, Frank Daig, a forestry graduate of Virginia Tech, also is involved with overseeing the crews. “He’s been a tremendous help,” said David.

The sawmill cuts about 125-150,000 board feet of material per week — mainly hardwood. The dominant hardwood species in the region are oak and poplar, with some hickory, maple, and gum. Hardwood lumber production is about 40 percent for the pallet industry, 40 percent railroad ties, and 20 percent grade. All material is sold rough.

The three timber harvesting and chipping crews each produces about 50 loads of wood products per week. It breaks down to about 30 percent saw logs, 30 percent round pulpwood, 20 percent ‘clean’ chips for the paper industry, and 20 percent biofuel chips.

The logging crew primarily harvests timber to supply the sawmill with saw logs. The chipping crew works on a different job and will also supply saw logs to the sawmill. The thinning crew works mainly in pine plantations to produce round pulpwood.

David tries to keep the crews working within about a 40-50 mile radius of the sawmill. “Lately we’ve had to look at going a little further,” he said, to buy timber.

“Proximity to the mills in West Point and Hopewell is a factor,” noted David. West Point is about 50 miles southeast of Ruther Glen while Hopewell is just over 50 miles to the south.

David recently agreed to provide contract chipping and logging for WestRock on timber the paper company purchased. “But just about everything we do is stumpage we buy ourselves,” he added.

David has acquired a mixed fleet of logging equipment over the years, but Cat cutters and skidders are an integral part of the company’s operations. In fact, Cat machines do the work of felling timber and thinning pine plantations.

The most recent addition to the Cat line-up of equipment was the 553C, which David obtained from Carter Machinery about 10 months ago. Carter is a dealer for Caterpillar and has 17 locations throughout Virginia, including two in the greater Richmond area.

Caterpillar now offers the Cat D Series wheel feller buncher — the successor to the C Series — with two models, the Cat 563D and 573D. The new machines, which meet U.S. EPA Tier 4 Final emission standards, provide increased reliability and durability along with greater customer value in performance, comfort, and serviceability according to the manufacturer.

Before making a buying decision, David and the operator, who is the foreman of the thinning crew, considered and tried several brands. “The operator liked the maneuverability of the Cat, the way it handled,” said David. “It just seemed to fit the thinning operations a little better.”

He has a lot of equipment operators who have been with the company for years, and they prefer Cat cutters. “They just seem to like the way those machines handle,” said David.

David sells grade lumber to companies in Virginia and North Carolina. For the pallet industry he cuts cants and mainly 6/4 material. It is sold mainly to pallet manufacturers in Virginia and another mill to be remanufactured into pallet deck boards and stringers.

When cutting pine the mill produces 4×4, 4×6, and 6×6 timbers. David has several markets for the material, and lately some pallet companies also are buying pine.

Pine pulpwood harvested by the thinning crew usually is supplied to Verso, which operates a paper mill in Maryland but maintains a large wood yard operation just down the road from Ruther Glen in Doswell.

The chipping crew is equipped with a Peterson Pacific model 4800 flail debarker and a Morbark 23NCL whole tree disc chipper. The ‘clean’ chips are supplied to WestRock, which has paper mills in West Point and Hopewell.

Unmerchantable material is processed into biofuel chips produced by a crew with a Bandit 2590 drum chipper. Biofuel is supplied to a Dominion Energy plant in Hopewell as well as the WestRock mills. Some of these type chips also are supplied to a company that produces mulch products, including chipped wood material for covering playground surfaces.

Up until a few years ago, the chipping crew followed the logging crew on jobs to clean up the job and chip the unmerchantable material. However, three years ago David invested in the Bandit machine that is part of the logging crew. “We try to chip up the biomass as they’re logging the tract,” he explained.

The Great Recession was certainly a challenge, David acknowledged. “It was tough times,” he said, after the housing industry collapsed in 2008-09. “Markets fell a lot. At the same time, fuel prices spiked, and other costs of doing business remained high while prices for wood products were low. “We had to tighten our belt a little bit, but we knew if we were able to survive, that things would be better down the road.”

“The hardwood market is really strong now,” said David. “Other markets for pulp and chips seem to be gaining momentum…It looks like in the near future things ought to be good.”

The company is pretty much able to supply its own sawmill with logs although occasionally it buys logs from contractors. Since the sawmill cuts mainly hardwood, some pine logs are sold to mills that specialize in pine.

In the log yard of the sawmill, logs are unloaded with a John Deere 644K wheel loader and staged near a Barko 595 knuckleboom loader. The Barko is used to cut the logs to length on a CSI bucking saw, and the logs are fed to a Morbark 640 rosser head debarker. The cleaned logs are broken down on a Frick head rig that removes two or four sides. The two-sided or four-sided cant then goes to a Tierney 8-inch combination gang-edger to be sawn into lumber products. The lumber is trimmed on an Arrington trimmer and goes to a green chain to be pulled and stacked by hand.

The company offers a group health insurance plan and also a retirement savings plan; it matches employee retirement contributions up to a certain percentage. The company also conducts monthly safety meetings. “We strive to have all our employees work safely,” said David.

When asked what he likes to do in his spare time, David laughed. “I really don’t have any spare time,” he said. When his daughter was young, she played softball, and he traveled to watch her play in tournaments. “Just try to spend time with the family, really,” he said.

David’s son, Joe, 21, began working in the business two years ago. He has been working in the shop, helping David, and also learning aspects of the sawmill and logging operations. “He’s been on the knuckleboom loader a lot lately,” he added, unloading trucks.

“He’s learning a lot of different things around here,” said David. “I’m hoping he can follow in my footsteps.”