COLFAX, North Carolina — A new piece of forestry equipment has enabled Greg Roberson to do more work and make more money in his contracting business, which specializes in removing trees to maintain highway and gas line rights-of-way.

The impact of using a Woodcracker tree shear attachment has been nothing short of amazing, according to Greg, who operates Need a Tree Cut, LLC from his home in Colfax, North Carolina.

Colfax is a community almost mid-way between Greensboro and Winston-Salem.

Greg grew up in Pittsboro, which is about 30 miles west of Raleigh, but has lived in the Colfax area about 20 years.

Greg, 48, has been in business for himself since 2013. He previously was a partner in a similar business that he and a friend launched in 2009. That company focused on removing trees for homeowners and was equipped with a bucket truck and a chipper.

Greg primarily does contract work for the North Carolina Department of Transportation and a gas utility company. At the time he was interviewed, he was working “wide open” for the highway agency.

For the highway agency, Greg’s company removes trees close to roads. The work for the gas utility is similar, removing trees that encroach on gas line rights-of-way.

Greg’s business has an assortment of equipment. Besides the new Woodcracker tree shear attachment, the company has a Jarraff tree trimmer, three excavators (Doosan, John Deere, and Takeuchi), a Fecon FCM22 whole tree chipper, a Galion motor grader, and a Kubota skid steer. Greg also has two additional Fecon attachments — a Bull Hog mulcher and a shear. The company also has Husqvarna chainsaws plus a pair of dump trucks, a semi-tractor, a low-boy trailer and chip trailer.

The business employs two other men — one who operates equipment, and another laborer who also does work with a chainsaw and also runs the skid steer. Greg’s wife, Michele, does the company’s paperwork.

Before partnering in business, Greg worked as an operator on an excavator, as well as a motor grader, for a couple of different companies.

He and his partner parted ways on good terms and remain friends, and Greg refers homeowners to his former partner for tree removal services. The two just wanted to focus on different segments of business.

“We do commercial work,” said Greg.  “He does homeowner work.”

“I had a lot of contacts in the commercial side,” explained Greg, since he had worked on DOT jobs before as a motor grader operator. Greg wanted to concentrate on tree removal work for commercial projects while his partner wanted to serve homeowners. “I just felt like I could make a whole lot more money being out on my own,” said Greg.

He was not familiar with Woodcracker until he came across the company’s exhibit at a trade show in Columbus, Ohio. The event was the Tree Care Industry Association Expo.

After seeing the company’s products in Ohio, Greg did a little more research, viewing the company’s videos on YouTube. Woodcracker tree shear attachments use a knife for cutting the tree. Greg already was familiar with the technology since he owns the Fecon shear, which is attached to the skid steer. A shear requires much less maintenance than other types of forestry felling attachments, he noted. The blade just requires occasional sharpening.

He decided to purchase the Woodcracker C450 tree shear attachment, which is now mounted on his company’s Doosan 225 excavator and has been in use for a few months. The Woodcracker C450 has a cutting capacity up to 22 inches in diameter in both hardwood and softwood.

The Woodcracker shear attachment has made an immediate favorable impact on Greg’s business. “It is faster,” he said. “My production…has jumped up 75 percent.”

The Woodcracker C and CL series attachments are tree shear heads that utilize a knife to cut trees and brush. The attachment grips the tree like a forestry industry felling head or feller buncher head.

Another important benefit of the equipment is safety, noted Greg. “It is tremendously safe,” he said. “It is amazing how safe the Woodcracker is compared to a chainsaw.”

The shear cuts the tree “like a scissors,” noted Greg, and holds the stem securely for controlled felling. He can lay the stem down where he needs it for the chipper.

Depending on the size and height of the tree, first Greg will reach up with the excavator boom and cut a tree about 15 feet from the ground. After setting down the top part of the stem, he will fell the rest of the tree. “That way it’s just a whole lot safer,” he said.

Previously, Greg used the excavator to apply some pressure to the top of the tree to control the felling direction, and to notch the tree with a chainsaw. The excavator then would be used to finish pushing the tree over at the cut. For trees that were 11 inches in diameter and smaller, Greg used the skid steer with the Fecon shear for felling.

“It is unbelievable,” said Greg, the volume of wood he can cut now with the Woodcracker.

Woodcracker offers various attachments for cutting and felling, splitting logs, clearing land with shears, and removing stumps and roots from the ground.

Woodcracker tree shear attachments have accumulator arms similar to a feller buncher to hold multiple stems and to allow for controlled felling. The shear cutting mechanism provides long life and requires little service, so the attachment is low maintenance; the blade is easy to sharpen and is replaceable. It features easy-to-operate, user-friendly controls and the multi-grip controller and auto-speed system are highly efficient for good fuel economy and time savings. Various installation options enable the unit to be attached to conventional carrier vehicles.

Woodcracker offers four models of cutting attachments in the C series. They range in capacity from 12-24 inches, with endless rotation left and right and accumulator arms. The company offers the CL series of economy cutting attachments that are designed for use with smaller excavators, as will as skid steer loaders, etc.

Working for the highway department, Greg’s company works close to the roadside, and it is critical to control the felling process so trees and limbs do not fall into the highway. The work is all for maintaining highways and highway rights-of-way; Greg’s company does not do any tree removal work or land-clearing for new highway or utility right-of-way construction.

On highway projects, the company typically works between the edge of the asphalt or concrete and a distance 50 feet from the highway. “Anything in that, we cut,” said Greg.

The highway department pays Greg’s company by the hour, and the gas utility pays him per square foot.

“We’ve got plenty of work,” said Greg. “The economy is just growing…It’s wonderful.”

The work the company does puts it in both hardwood and softwood. The terrain may be relatively flat or hilly with embankments. “That’s where the excavator comes in handy,” said Greg. “It doesn’t tear up the bank.”

Greg salvages good saw logs and supplies them to a few sawmills. He even uses the Woodcracker to cut saw logs to length after a worker measures the log and marks it.

However, the emphasis is on felling trees and chipping the material. “If it doesn’t make a good log, I’m throwing it in the chipper,” said Greg. The chipper is fed whole trees or pieces of trees with the Woodcracker. The only time the crew deals with limbs is if they are being removed to get a saw log. The chips are left on the ground at the job site although occasionally Greg has markets for chips and hauls them.

Greg and his crew usually are able to work within about 50 miles of his home. “I’m pretty much happy the way we are right now,” said Greg, although he added he would “like to grow a little bit bigger.”

Greg was considering investing in a Sennebogen forestry machine, essentially a four-wheel excavator. He put that on hold after buying the Woodcracker.

He modified his skid steer. Originally it was equipped with rubber tracks. Greg replaced them with steel tracks, which provide a better grip and improve maneuverability on slopes. “It’s a rougher ride,” he said, “but well worth it.”

Greg provides his employees with regular safety training. They recently received CPR training from a company in Greensboro.

He and his wife enjoy camping and have a travel camper. They also enjoy deep sea fishing, honeymooning in Hawaii and deep sea fishing while they were there. They enjoy trips to the North Carolina Outer Banks and Gatlinburg, Tenn.

The new Woodcracker equipment has been a boon for Need a Tree Cut, LLC. “I’ve been really amazed at the Woodcracker — how much money we’re making with it because we’re going so fast,” said Greg. “And we don’t have to use chainsaws.” 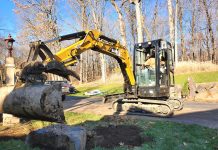