While clearcuts may not be pretty, especially right after harvesting, they are one useful tool in a land management toolbox. Back in 2012, I visited a recent clearcut forest in Pennsylvania. You can see the video of me talking to myself like an absent- minded professor about the species of plants and trees that were re-establishing themselves after the cut.

Well, I happened to stop back at the same place in 2016 and walked the same property taking a video to show the land transformation in only four years. See the video of growth in 2016 below.

This was a very large clearcut, in total probably 100 times larger than what is taught in forestry school as a “sustainable” clearcut. It was conducted on a very poor upland site and has not been re-planted or managed in any way since the harvest. Basically, this is a “worst-case” clearcut from an environmentalist’s point-of-view. And the site has regenerated itself naturally. While the videos speak for themselves, here are the main points to consider:

Editor’s Note: Chuck Ray formerly worked for a major forest products company and currently works as an extension professor at Penn State University. His blog can be found at http:// gowood.blogspot.com/. This column was adopted from a post originally made in 2016. 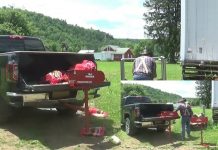