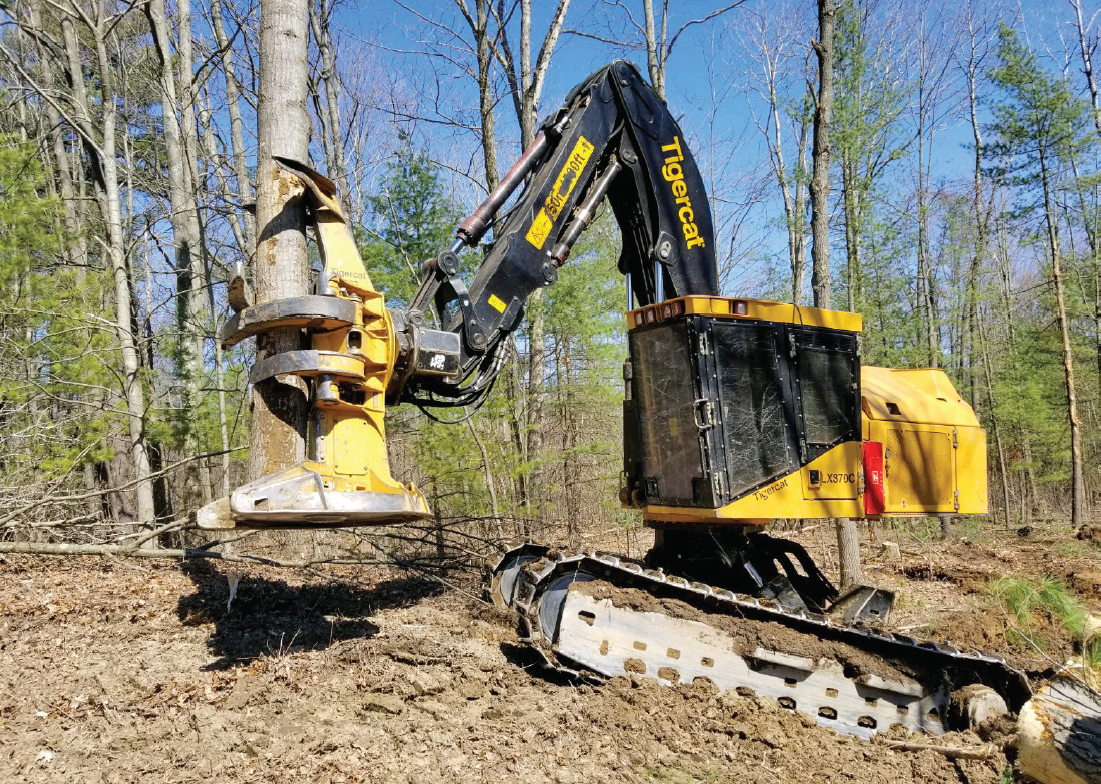 NORTHVILLE, New York — There’s gold in them-there hills are promising words that have long set thoughts spinning and prospectors running. But it is the poetry of mountainous vistas that keep people grounded and happy.

(George) ‘Butch’ Reynolds worked as a logger for other companies before he established Mountain View Logging Corp. 30 years ago. “Taken by” is how he reacts to what he sees from his vantage point at the end of each day. So taken, that Butch named his company Mountain View Logging.

“I was brought up around logging,” said Butch. Members of his family logged. “I wanted to go out on my own. After working for other companies, I got a little skidder – a 380 Timberjack.”

The Right Equipment for the Job

Butch bought his first Tigercat machine, a skidder, in 2008. He said he was persuaded to try a Tigercat skidder by Joe Girard, a member of the sales team at CJ Logging Equipment Inc. who is responsible for customers in northern New York State. CJ Logging Equipment is headquartered in Boonville, New York.

The decision to purchase the Tigercat skidder was not difficult. “I tried one out, and I liked it,” said Butch.

Over the years, Butch has moved to a full lineup of Tigercat machines because they offer him flexibility at job sites – where his team fells both hardwood and softwood species. The machines are also dependable, he explained. “I can put a lot more hours on them,” he said.

Three years ago, Butch added a Vermeer WC2300XL chipper. It is used “just for top wood,” he explained. Chips are sent to a pulp mill for fiber fuel.

The Vermeer chipper was purchased from Vermeer Northeast in Castleton, New York. It’s been a strong performer. “I like it,” said Butch. “It’s compact.”

Compact design is the ideal companion of flexibility for the varied work sites that Mountain View Logging encounters in the central part of the Empire State. Ninety percent of the jobs the company works are for Lyme Adirondack Forest Company, LLC headquartered in Queensbury, New York.

Butch’s team generally works just one site at a time. The work may be a clear-cut project or a selective-cut project. The versatility of the Tigercat equipment is important to meeting the specifications of the job, which are provided by Lyme Adirondack Forest Company.

The Mountain View Logging team generally works within a 70-mile radius of its Northville, N.Y. home base. Northville is part of Fulton County. It is quite near the center of the state. And it has a population of 1,100.

The Tigercat machines are relatively easy to maintain and service, said Butch. But when he does need a major bit of work done, he appreciates the proximity of CJ Logging Equipment. The Boonville headquarters for the company is just 60 miles to the northwest of Northville in nearby Oneida County.

CJ Logging Equipment Inc. has been in operation for more than 35 years. Family owned and operated by Mark and Linda Bourgeois, the company derives its name from Carl J. (C.J.) Bourgeois, Mark’s grandfather, and began its operation out of C.J.’s garage in Boonville, New York. Carl Bourgeois was well-known in the region for selling Harley Davidson and Husqvarna Motorcycles, Lonestar boats, Polaris snowmobiles (of which he sold the first in the northeast), and firearms from his garage.

In addition to its original location in Boonville, CJ Logging has expanded to locations in Little Valley, New York; Allenwood, Pennsylvania; and Vermont (MB Equipment).

CJ Logging Equipment strives to match requirements of loggers with machines that are an optimal fit for their operation. Its entire team is dedicated to providing the best solutions to customers.

The line of forestry equipment offered by CJ Logging is a diverse one. Tigercat, Komatsu, Link-Belt, TimberPro, CSI, Fecon, Hood, Husqvarna, LogMax, Quadco and Risley are just some of the brands offered. More choices for customers mean that customers can rely on CJ Logging Equipment for a large portion of their equipment needs.

Though the forest industry is always changing, and equipment lines have been added over the years, CJ Logging has maintained its top priority of providing quality service to its valued clients. Its knowledgeable staff is committed to be friendly and helpful every step of the way, from inquiry to final sale…and then afterward. And it’s not uncommon to meet one or more of the Bourgeois family members while visiting one of company’s locations, onsite and eager to help.

Butch commented, “I’ve been working with CJ Logging for about 10 years. Whether it’s Mark Bourgeois, Joe Girard, or guys in the parts department, they’ve done a great job taking care of me. They even provided loaner equipment at times, when a machine was being serviced, they kept me working. I appreciate the excellent working relationship I have with CJ’s.”

Smart Design and Durable Performance Are Hallmarks of Tigercat

Headquartered in Branford, Ontario Canada, Tigercat has established a reputation for durable equipment design. The toughness it builds into its machines also crosses over to a line of severe-duty, off road equipment.

The Tigercat 234B loaders that Mountain View Logging chose illustrate the strength in the design of Tigercat machines. As Butch notes, the Tigercat machines are built for long days of service in often difficult conditions. There are not just slopes, but also snow-covered slopes in much of the year.

The T234B track loader combines a high ground clearance with great stability – two important features in the rolling and often precarious terrain on which Mountain View works, especially so when the muchencountered hemlock and spruce with low, sprawling branches are factored into the picture. The tracks on the Tigercat T234B have long frames and wide stance that contribute to its stability.

The Tigercat 234B looks a little like a robotic, high-stilted figure from a futuristic, science-fiction story when mounted on a Tigercat AC16 articulating carrier. But it is very much a functional player on planet earth. It can also be mounted on a trailer. The boom on the 234B loader is designed to take on a very long day of operation without succumbing to the lateral stresses placed on it.

Attention to Detail Allow for Easy Operation and Maintenance

A convenient platform makes access to the engine and daily service points on the Tigercat loaders as streamlined as possible. The compartment itself is quite spacious and arranged in an orderly, visually accessible way.

Valves on the Tigercat loaders are similarly accessible. They are located under a walk-up platform. Routings for the hydraulic and electrical components are also arranged in a visually accessible manner.

Comfort of the operator is fully considered in Tigercat machines. The ergonomically- designed cab of the loaders, for example, is roomy and ensures the operator can concentrate on tasks.

Although Butch uses the Vermeer chipper only for tops, the WC2300XL is a capable whole-tree chipper. The Vermeer is powered by a CAT C-13 Tier 4 engine with 440 horsepower. The chipper has a built-in skidder grab on the tongue so that it can easily be moved around a job site by a skidder or an excavator.

New York State has some of the most exacting expectations for loggers in the nation. Foresters and loggers work collaboratively to sustain woodlands. Lyme Adirondack Forest Company (LAFCo), a primary customer for Mountain View Logging, takes forest management very seriously.

LAFCo owned timberland is sustainably managed in accordance with the guidelines of the Forest Stewardship Council (FSC) and the Sustainable Forestry Initiative (SFI). Working with New York State, the company has arrived at a conservation easement on its 276,000 acres of timberland. The land cannot be used for development, but it can be used for recreation.

The heritage of the Adirondacks is tied closely to preservation. The original effort at preservation in New York State – with the establishment of a forestry commission in 1883 – was made primarily to protect water supplies. By 1894, however, the goal of protecting timberland was firmly articulated as well.

In 1885, the state of New York began to acquire forested land and to establish preserves. The Adirondack and the Catskill preserves were the two earliest acquisitions.

The entire Adirondack region where Mountain View Logging operates is a favorite site for recreation in all seasons. When the Conklingville Dam was completed in 1930, the objective was primarily to regulate flow of the Sacandaga River into the Hudson River. The dam created a large reservoir, which is known as the Great Sacandaga Lake.

In his free time, Butch enjoys boating on nearby Sacandaga Lake with his family. A native of the area, he has long appreciated the opportunities for outdoor activities of all sorts.

The professional path Butch took is a good fit. “I like working outside,” he said. “It’s what I’ve grown up around.” Harmony ties together all levels at Mountain View Logging. “We’re loyal to the companies we work for,” said Butch. “We have a good relationship with the whole crew.”