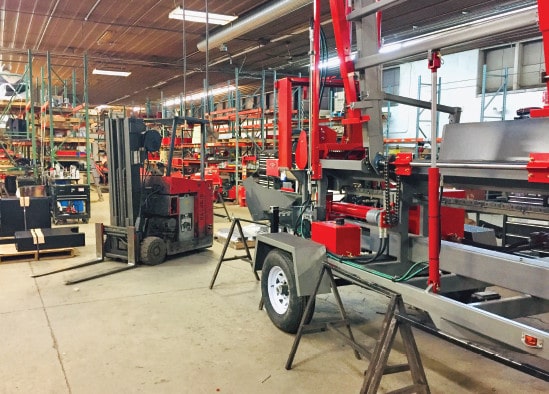 A lot has happened since Matthieu Timmins and Matt Dubitzky formed Automated Biomass Systems five years ago and began manufacturing machinery and equipment for firewood production.

And a lot more is about to happen. The company, which acquired Timberwolf, another manufacturer of firewood equipment, will go forward this year marketing and selling its products under the Timberwolf brand name. And it expects to bring three new products to market in the first quarter of the new year.

With the acquisition of Timberwolf in late 2017, Automated Biomass Systems became a leader in the industry that provides machinery for firewood production, both for the homeowner and for businesses. Not bad for a couple of young men with widely divergent backgrounds who not long ago operated a successful firewood business.

Timmins is a majority owner of the business and serves as president. His role is overseeing manufacturing operations, engineering and product development. Dubitzky has the title of director of marketing and sales, and — working from Colorado — is responsible for overseeing the efforts of their sales and marketing team in New York. Timmins and Dubitzky both are in their mid-late 30s. Timmins, who grew up in Ontario, learned about metal fabrication and equipment repair and maintenance from working with his father, starting as a teenager. His father worked in the mining industry, at various times employed by mining businesses and also operating his own company, and Timmins began learning by working on his father’s machinery and equipment. His father also sold a couple of hundred cords of firewood each year, and he helped him in that small business.

Dubitzky grew up on Bainbridge Island in Washington State, which is about 35 minutes west of Seattle via ferry. His parents had grown up in Colorado, which was like a second home to him because of the presence of grandparents, aunts, uncles and cousins, and he moved there after graduating from high school.

Dubitzky started a business when he was 22, providing services to budding musicians. He worked with artists on the East Coast and in the Caribbean, signing them to recording labels, assisting them with selection of recording studios, promoting them and scheduling shows for them, and marketing their albums. He also worked on boats as a dive master.

The two men met through mutual friends. At the time, Dubitzky was in between jobs, and Timmins was operating his firewood business, mainly selling cord wood but also selling a small volume of packaged firewood. “We kind of hit it off,” recalled Dubitzky. Timmins called him the next week and offered him a job selling firewood. “I was, ‘Okay.’ I didn’t know that much about it.” He started work the following Monday.

Dubitzky focused on marketing and sales of packaged firewood. He took samples of the company’s bundled firewood and began driving throughout Colorado, signing up gas stations and other outlets to distribute the company’s firewood. Within a couple of months, he signed up 160 new accounts. “That kind of exploded overnight,” he recalled.

Dubitzky landed accounts with companies like Kroger, Safeway, and Whole Foods, with packaged firewood being delivered on pallets to their distribution centers. They also worked out an arrangement with an ice company to distribute packaged firewood to the retailers.

After the economy nosedived in 2008- 09 and the Great Recession took hold, sawmills shut down, and with it loggers and the supply of logs. Timmins acquired a logging business to keep the firewood company supplied with wood. Then they began supplying packaged firewood to companies like Kroger and Tractor Supply on a national basis. Together, they operated the firewood business and then they added logging operations for about 7-8 years.

They had a competitor in the firewood business, West Range Reclamation, which also had extensive logging and timber harvesting operations from New Mexico to Wyoming. Eventually, they began supplying packaged firewood to West Range and operated almost as a subsidiary to the larger company. The owner of West Range later bought their business, and both Timmins and Dubitzky worked for the new owner for a couple of years.

When Timmins first started the firewood business, he bought some used machines. “We never really liked what we bought,” he recalled. Since their focus was on packaged firewood, it was important to produce properly sized material that could be packaged in bundles. “The processors could make wood fast, but we had to spend a lot of time to re-split it to get it to the right size,” he said.

The men developed some equipment for their firewood business, although initially they had no intention of marketing and selling the machines to other firewood producers. When it came to tinkering with the firewood production equipment, and modifying machines or developing their own, “Matt had all the technical skills,” noted Dubitzky.

Their first idea was to develop a hydraulic box wedge that would slice through a round of wood to produce split pieces of uniform shape and size. “We kind of refined that over time,” said Timmins, “made it better and better.” It is marketed and sold today as the company’s AutoSplit machine.

Then they turned their attention to building conveyors, a log merchandiser, and shrink wrap packaging equipment — all developed while they were still operating as a subsidiary to West Range.

The men decided in 2014 that they wanted to be working for themselves and launched Automated Biomass Systems. They had used numerous brands of firewood equipment — splitters and processors, noted Dubitzky. “We saw the quality in them and said to ourselves, ‘Okay, maybe there’s room for innovation.’ “

“It was kind of driven from us having hands-on experience as a consumer and possibly seeing a way to fit in the industry by making some changes.” They focused on developing equipment that would be more durable and reliable as well as increasing efficiency.

The impetus to begin manufacturing their own line of equipment for sale was driven by Timmins. “Matt’s always been very highly driven,” said Dubitzky. “He likes challenges. He likes to push himself. He wanted to do something bigger.”

They built their first six machines working in a pole barn. Those first machines were all sold to customers in the East. “That’s when we realized where the market was,” said Timmins.

He asked Dubitzky if he wanted to join him in the venture with the understanding that manufacturing operations would be set up in the Northeast, but Dubitzky could continue to perform his role in the business from Colorado.

Dubitzky recalled the offer. “I thought about it for about a week, called him up, said, ‘Let’s have lunch.’ I said, ‘Let’s do it.’ He said, ‘Good. We’re leaving tomorrow.’ ”

Timmins had already begun scoping out possible business locations, and the two made the trip East and settled on leasing a building in Marathon, New York, which is about 45 miles south of Syracuse. Timmins sold his firewood and logging businesses in conjunction with establishing Automated Biomass Systems and setting up manufacturing operations in New York.

Coming from a background of actually operating a firewood business and with their knowledge of and successful development of machinery for their own business, the company’s products have been well received, Timmins acknowledged. “Our equipment never looked like other people’s,” he said. “That’s why we thought we had an opportunity.”

The company’s flagship machines are the AutoSplit and AutoFine.

The AutoSplit removes more than 4 inches of material from the bottom of the round, splitting it into even pieces, and cycles automatically. “It’s kind of a different take,” observed Timmins. Some companies have tried to copy it, he noted, which he considers a compliment.

The AutoSplit is more efficient, said Dubitzsky, because it reduces handling, including picking material up off the ground, and re-splitting. The additional handling and work involved with a traditional splitter causes more fatigue, he noted. Even though a splitter may be marketed as producing two cords per hour, the operator will not be able to keep up that pace for eight hours because of the fatigue factor, he suggested.

“With the AutoSplit, our customers guarantee they do two cords per hour consistently…That kind of proves you can save energy and keep that amount of production up throughout the day.”

The AutoSplit “got a lot of attention,” acknowledged Dubitzky, because it was not a traditional I-beam splitter.

The AutoFine is a device to agitate finished firewood to remove dirt and other debris, such as loose bark and wood fragments. The firewood bounces along the top of a series of rotating discs, and the fines drop below. “It’s less expensive, more reliable than a firewood tumbler,” said Timmins.

When they operated a firewood business in Colorado, they owned some Timberwolf machines. “We always kind of liked their product,” said Timmins.

With the acquisition, Timmins and Dubitzky decided to focus on their flagship machines and also improving the design of the existing Timberwolf product line. Manufacturing operations were consolidated to New York.

The effect of the acquisition was immediate and significant. Sales leapfrogged from 2-3 units per week to 15-20 per week. “It was a very large step up,” said Timmins, with a 400-500 percent increase in revenues. About 60-70 percent of the company’s products are sold to homeowners, generating about 40 percent of revenues, and the remainder are sold to commercial firewood producers. The company now employs 30 people.

The company’s equipment is sold through the network of 60-70 Timberwolf dealers from Maine to California. Prospective customers who do not have ready access to a dealer can buy direct from the factory.

Timmins is interested in expanding the dealer network in the Great Lakes region. “That’s a pretty good firewood market,” he noted. “We want to add dealers there.”

Automated Biomass Systems is in the process of re-branding and will be introducing a series of new products in the first quarter of 2019. Equipment for the firewood industry will be marketed and sold under the Timberwolf brand name. The first new product to be launched will be the Timberwolf Alpha splitter, which combines features of the Timberwolf TW5 and TW6 model splitters with the AutoSplit. “It’s much improved, much faster,” said Timmins. “We’re going with this new machine across the board.”

By the end of March they hope to introduce a firewood processor that will incorporate the AutoSplit box splitting wedge technology. The machine will be targeted to commercial firewood producers.

Timmins is optimistic about the future of the firewood industry, and Automated Biomass Systems. As climate change becomes more of an issue, he believes governments will impose more taxes on fuels, particularly fossil fuels, in order to reduce carbon emissions. That would stabilize fuel prices and spur investments for heating with biomass. “It has a lot to do with government policy,” he said.

“I see a bright future for the industry,” said Dubitzky. “I really think the equipment manufacturers that survive will be the ones that innovate their products…If you have a quality product, that’s what counts.”

The quality of the company’s employees has had a lot to do with its success, noted Dubitzky, whether it be those who work in engineering, parts fulfillment, sales, or on the shop floor fabricating and assembling the company’s products. “They deserve all the credit, for sure,” he added.

(For more information about Automated Biomass Systems and the Timberwolf product line, visit www.timberwolfequip.com or call (607) 849-7800.)

Firewood Startup Off and Running With Focus on Wholesale Bundles