HARRISON, Michigan – Producing and supplying “clean” chips to the pulp and paper industry has been a good business for Mike Cook, and that’s why he has stuck with it over the years.

And with a new particleboard mill scheduled to come online within the next couple of years, which will provide him with another market for his product, he has plenty of reason to be optimistic about the future for Cook’s Forest Products (CFP).

Before Mike began working in the forest products industry, he operated an automobile body shop. When the business dried up in 1979, however, he began cutting firewood for himself, and soon people wanted to buy firewood from him. He operated a firewood business for about a year and then started producing round wood; at the time, Weyerhaeuser had put in a new mill, and he began supplying it.

He decided to add a chipping operation in 1985 and purchased his first chipper from Morbark. In 1994 he made the decision to devote his business entirely to producing clean chips and purchased a Morbark Flail Chiparvestor, a combination chain flail debarker and disc chipper. Since then the company has produced “clean” chips and what Mike calls “energy wood” – wood that is chipped with the bark on and supplied as boiler fuel and similar products.

During the various economic downturns over the years, Mike has had offers to produce round wood for mills, but he turned them down. “I’m not converting. I’m staying where I am.” Although the business has suffered a while at times, “…in the end it’s been the best thing I’ve ever done.”

“It hasn’t always been rosy,” observed Mike. “There’s been some tough times.” In 2005-6, three mills in the region closed. “We were chipping pretty hard,” he said. The company was cut back from producing 1,200 tons per week to 400 for a short period.

But Mike persevered, and now his business, steady for 22 years, is the longest continuously operating flail-chipping producer in Michigan. There are no loggers running flail-chip operations in the Upper Peninsula, although there are some producers who run stand-alone flails with chippers in the Lower Peninsula, according to Mike.

When asked what he attributed his longevity to, Mike said, “Stubbornness.”

That stubbornness has served Mike well. The company, based in Harrison, Michigan, in the “middle of the mitten,” as Mike put it, employs about 20 workers. There is a 10,000-square-foot shop with an office, and Mike and his wife, Kim, also have an office in their home.

The company currently produces about 75,000 tons of “clean” (from wood that has been debarked) hardwood chips per year, an average of ids the mills, which also buys pulpwood and runs it through its own debarking and chipping equipment. The mills percentage of acceptable chips is 85%, according to Mike. “They always want us,” said Mike.

A year ago the same mill was making about 1,800 tons of product daily. Now it is producing about 1,000 tons per day. “That’s a lot less,” noted Mike. “Everybody got cut back but us. They want our product. They have not cut our quota.” By contrast, many loggers who produce round wood have wood on the ground, they don’t know what they’re going to do with it.

CFP’s newest flail-chipper is a Morbark 2755 that Mike bought about two years ago, but it’s not the only Morbark flail-chipper the company has. Mike owns two more of the combination machines, and he also has another Morbark model 22 for chipping material for boiler fuel and similar energy markets. Each of Mike’s Morbark flail-chippers is equipped with the company’s model 500 loader to feed trees into the flail at the starting end of the machine.

“We’re running a really nice machine,” said Mike, referring to the Morbark model 2755. “The quality and service we get out of it is phenomenal.”

His Morbark 2755 flail-chipper can process a 30-inch diameter tree, chipping at a rate of 2 feet per second, said Mike. That amounts to more than 1 ton per minute. “In really good wood, we get close to two tons a minute,” he added.

His proximity to the factory means Mike deals directly with personnel on that level, not a dealer. “I’ve always had a good relationship with them…over the years.” He has visited the factory on numerous occasions to give Morbark staff feedback in the process of developing and improving equipment.

Morbark offers a full line of flail chiparvestors – flails in several different sizes and configurations. They are available with two, three, or four flail drums, one or two engines, cab and loader or no cab and loader. The company manufactures portable or stationary machines, stand alone or combination units, diesel or electric powered. Morbark also offers a wide range of options to enable loggers to customize a machine for their application.

Morbark flails are highly productive and engineered to maximize output. They are known for their durability and high resale value. They allow unmatched flexibility in controlling individual flail drum speeds, RPM, and feed rate in order to meet the challenges of varying timber, climate, and conditions. These machines allow the user to produce high-quality chips even from non-merchantable or juvenile timber.

Mike’s relationship with the company goes beyond being a customer. He does a lot of equipment demonstrations for Morbark. On the day he was interviewed for this article, he was preparing to meet an equipment dealer visiting from Australia who was going to watch Mike’s equipment work in the woods. In addition to arranging such visits for dealers and loggers, he also participates in the company’s Demo Days events to showcase Morbark equipment.

People from around the world – for example, Russia, Asia, Canada and European countries – have traveled to Michigan to see Morbark flail-chippers working on Mike’s job sites. “We enjoy it,” said Mike. “We get to talk to people around the world, and hear about their experience in the industry, their markets, and their challenges. Everybody’s got a different situation.”

“They’ve been really good for us,” said Mike. “Morbark does a great job of taking care of us. We do anything we can to promote their product.”

For felling timber CFP has a Cat 573 wheel feller buncher, purchased new last year, and an older Prentice 2670 wheel feller buncher. The company also is equipped with a new Cat 535D skidder, also purchased last year, and a Cat 545C skidder, two John Deere 848 skidders, and a couple of old Timberjack skidders. Mike has a Prentice 2348 loader and a Barko 160B loader both with slasher saws on self- propelled Big John carriers. They are used for cutting logs and firewood in conjunction with the flail chippers.

Mike has been doing business with Caterpillar dealer Michigan Cat for the last several years. “We really like them,” he said. “They bend over backwards to help us out.”

Mike had the opportunity to visit the Caterpillar factory in LaGrange, Ga. The company’s engineers and designers spent the day with Mike and some other loggers, showing them all the improvements and technology in the new Cat forestry equipment. “They are very interested in the loggers’ feedback and working with them to make the best possible equipment available. They have been in constant contact with us to make sure our equipment is performing as it should,” said Mike.

Mike also operates a firewood business, producing and delivering split firewood in 16-inch lengths. Those operations are equipped with a Cord King 48 firewood processing machine, an HMC firewood tumbler for removing loose bark and debris, and a John Deere tractor for moving and handling wood.

CFP does its own hauling with seven tractor-trailers. It has two new Freightliner SD 122 semi-tractors along with four older Kenworth T800s and a Peterbuilt 357. They pull seven purpose-built chip vans, which all have 6-7 axles. The company also runs a seven axle Kenworth T800 self-loader log truck with a 4 axle Transport Trailer pup. Michigan weight laws allow up to 11 axles per truck and trailer with a GVW of 164,000 lbs.

The new mill, to be built in Grayling about 50 miles north of Harrison, reportedly will run the largest continuous press in North America for producing particleboard. It is supposed to be operating by early 2018. It will buy “clean” chips; another competing market for Mike’s product should favorably impact markets and prices, he acknowledged.

Mike and Kim have two daughters; they have five grandchildren and another on the way. Kim does the bookkeeping for the business. They are lifelong members of a local church. Mike enjoys riding his motorcycle in the summer, and he does some downhill skiing in the winter. Mike and Kim enjoy visiting their youngest daughter, Keiley, and her family who live near Springfield, Missouri.

John Britton, 31, their son-in-law runs a flail-chipper and helps oversee operations in the woods. Mike, 59, has no plans to retire soon but would like to eventually back away from the business, scale back gradually. John and Lacey (Mike and Kim’s oldest daughter) have indicated an interest in buying the company someday. Lacey also helps in the home office.

The forest industry in Michigan is the second largest industry in the state. Cook’s Forest Products plans to be a part of the growing industry’s bright future.

(For more information on Morbark and its products, visit www.morbark.com.)

Recycling Operations Are a Key Part of Texas Construction Company 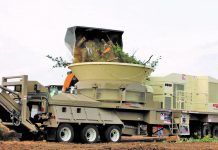 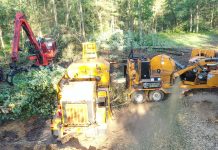