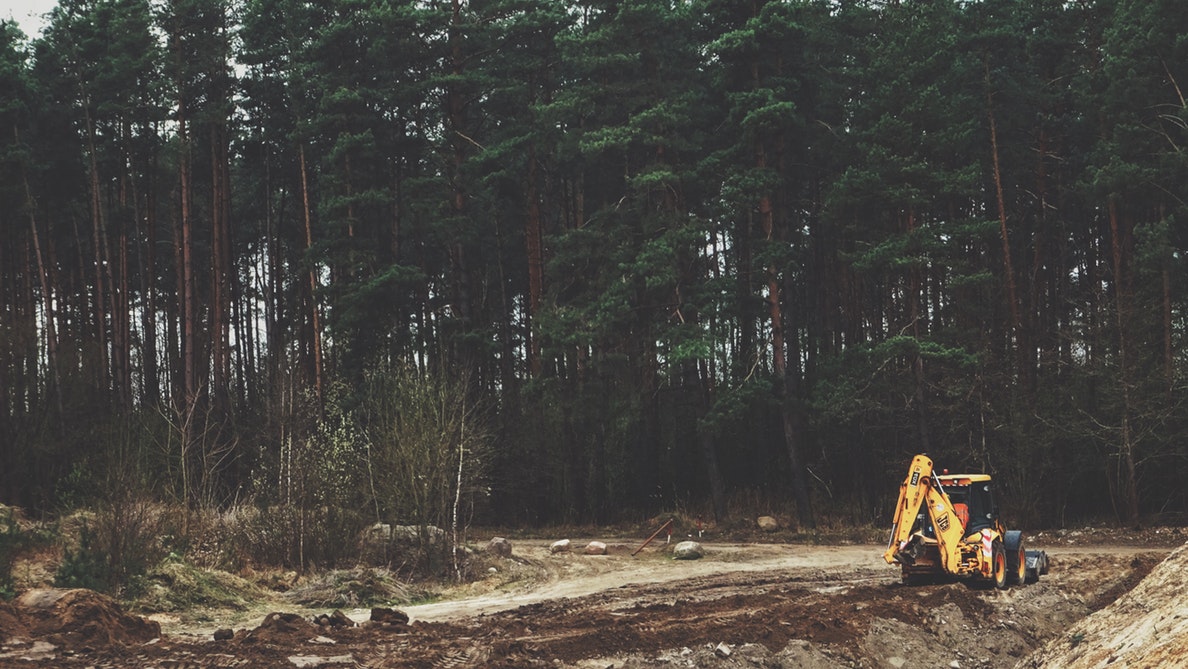 Schenevus, NewYork — Mike Sulas of Ouleout Valley Logging and Forestry often says, ‘Things just fall into place’. That’s how he sees his business of 16 years in Central New York and that’s what he also says regarding his relationship with Ponsse USA.

Imagine pursuing another company for months to purchase their harvester and never receiving any call backs. Imagine the frustration of knowing an equipment change is needed, selecting the machine you want, but not being able to begin the process, much less close the deal. But then one day while being hard at work, Sam Heikola, a sales representative for Ponsse USA headquarters in Rhinelander, WI, stops by unannounced on your land to introduce himself during a random business trip. That’s exactly what happened for Mike.

While on the trip, Sam had heard through a friend about Mike’s desire for new cut-to-length equipment and quickly followed-up. Mike was so impressed that he immediately flew out to Ponsse USA’s headquarters to tour the facility and products. During that trip he purchased the 2015 eight-wheel (8wd) ERGO with H7 harvester head.

“I guess it was meant to be,” said Mike, “because I found out later that the other company ended up pulling out of our area. I still never heard back from that sales rep to even give me that information.”

Mike said the same sort of thing happened for his 16-year-old business. He said he must have ‘slipped and hit his head on a tree or something’ when the decision was finally made to pursue logging full time. After working in forestry since graduating from NY Ranger School (State University of New York College of Environmental Science and Forestry) and being a weekend logger for seven years, he finally took his wife, Amy’s advice to be a full-time logger.

“Forestry is not a high-paying position and logging was such a better fit for me,” explained Mike. “We had been living in New Hampshire at the time but once the (new career) decision was made we moved back to New York where I was from originally. The cost of living was better and there were many more logging opportunities. Everything just fell into place.”

Ouleout Valley Logging and Forestry began in 2000 and was started with Mike and his brother as a tree-length operations business on the weekends. In 2003, Mike jumped into the business as a full-time logger while his brother left the business to pursue other goals. Because of increased opportunities with public land availability and the limited number of loggers who were pursuing mechanized operations, Mike transitioned to cut-to-length operations in 2006.

Changing directions meant that Mike could take advantage of the available softwood plantations. His stands, consisting of mainly spruce and red pine, are self-purchased through private individuals, but he mainly buys public stands from the state of New York, area counties or watershed areas. Basically, he buys trees, cuts them into saw logs, and sells the logs to three different mills. One local mill buys the red pine while the spruce is transported to two other mills, one 350 miles away to New Hampshire, and the other 400 miles away to Canada. Mike, whose business has no trucking division, sub-contracts trucks through the sawmills or sub-contracts them himself, admitted that trucking is the “tricky part” of his business. At times bunked log trucks are not available and logs are loaded into and hauled in covered vans. Though not optimal, Mike uses available means to get the logs to the mill.

While Ouleout Valley Logging and Forestry mainly consists of Mike and his wife as partner in the business, he does have one subcontractor who works with him 90% of the time doing a variety of tasks including: tree planting, operating machines, and doing hand cuts when needed.

Though Ouleout Valley Logging and Forestry’s cut-to-length operations began in 2006, the recent machinery upgrade late last year has been very encouraging to Mike. Mike is very glad for that surprise visit from Sam in November and feels good that he took the trip to explore Ponsse’s headquarters and products. He considers the upgrade to the Ponsse 8wd ERGO with H7 harvester head to be a wise decision. Mike primarily cuts sawlogs to 12ft and 16ft lengths with a wide range of diameters. He appreciates that his Ponsse H7 head can handle the diverse diameters, including the larger wood, and acknowledged the new harvester has also allowed for more precise cutting.

While Ouleout Valley Logging and Forestry is headquartered on the Sulas 45-acre homestead, his machines never leave the woods. The stand terrain is rather hilly and the ground is usually soft. More production occurs in August, September, October and in the winter months. Winter is the best time for logging conditions because of the frozen ground.

“It’s very cold for the logger, but it’s great for getting the logs out of the forest and there’s no mud or soft ground to contend with,” Mike said. “About the Ergo…It’s phenomenal! The machine seems 100% reliable and it’s a perfect match for what I do. The Ergo has been the best machine for me because of its stability.”

“The 8wd Ergo is the best machine for Mike because it can climb really steep hills and maintain stability,” said Sam, sales representative for Ponsse. “It can also operate on soft ground because the machine’s ground pressure is low. It has a new strong C5 crane to handle big timber. It’s a perfect fit for what Mike needs.”

“Our Cobra 8wd harvester was very popular in past years but the 2015 Ergo 8wd is currently our bestselling harvester in North America,” said Sam. There are a lot of reasons for this, but operator comfort and machine stability are two top selling features.

Currently an older 2003 Timberjack 1110D is handling the forwarding for Mike’s operations. During wet or soft soil conditions, Mike equips his cut-to-length machines with tracks to enhance traction and reduce rutting. One brand used is Clark Tracks which are available through equipment dealerships across the United States and Canada, exclusively distributed by Wallingford’s Inc. in Maine. According to Wallingford’s Director of Marketing, Dan Kissinger, “Clarks Tracks offer superior traction and floatation while yielding maximum equipment life, leaving behind less ground disturbance than other options on the market.”

Ouleout Valley Logging and Forestry’s business has been steadily growing over the years with annual softwood production at 5-7 million board feet per year with an additional production of just under 400,000 board feet of hardwood per year. According to Mike, most mills pay per 1,000 board feet, but some buy per ton.

The 2016 first quarter production numbers were the best Ouleout Valley Logging and Forestry has seen; and the company more than doubled its production of last year’s first quarter. During first quarter 2016, Mike lost only three weeks to weather when logging roads were too wet for transport. Looking back, Mike saw about a 10% production increase from 2014 to 2015, and looking forward, he expects business to continue to grow for the remainder of 2016.

With business success like this, and such a positive experience with Sam and Ponsse USA, Mike intends on purchasing the 2016 Ponsse Buffalo forwarder and hopes for an August arrival.

“The company impressed me and it (Buffalo forwarder) seems like it’s gonna be a good fit,” Mike stated. “There are only a handful of us cut-to-length guys in NY. There are not many local companies or machine service providers. I need a company that understands the business. If I have an issue six years from now and I have questions, I need to know that I can contact someone who knows cut-to-length. I need to be able to really get the tech support that I need and a support team who can lead me through fixing the problem on my own. Ponsse offers incredible technical support and understands your needs and what they’re selling. They don’t make a lot of products, just forwarders and harvesters. And their products are proven.”

Ponsse, which is located in over 30 countries with just 14 service locations in the US, just celebrated their 45th anniversary. According to Sam, they are the number one sellers of rubber-tired cut-to-length machines in the USA and they are actively seeking more service dealers to help their customers keep their machines in the woods.

“We would love to expand in the USA,” Sam explained. “Cut-to-length logging is growing in this country and it is our objective to provide the quality products and after-sale service that we promise each of our customers.”

Ponsse’s mission is to contribute to their customer’s success with productive and reliable Ponsse forest machines and services. It is their promise to be the “Logger’s Best Friend.”

And truly Mike has fallen into a new friendship with Ponsse.

“Ponsse truly lives and breathes cut-to-length logging and they are truly committed to seeing us (the guys in the forest) do well,” Mike explained. “They are better than most companies that I’ve experienced. They call me more than I call them. They come to visit me and check on things with no extra expenses to me. Once they came for three days with two men to service my machine for free. Their service is amazing. It’s the first machine that I’ve ever called the company myself to say, ‘Thank you!’ and that speaks a lot to me.”

When Mike’s not out enjoying his Ponsse Ergo, he makes excuses to hike and to hunt turkey and white-tail deer with his wife of 13 years and his 12-year-old daughter and 10-year-old son. But often he brings his children to work with him and enjoys teaching them what he loves to do in the forest. Not bad for someone whose work and life just “fell into place.”