Good forest management is an absolute in day-to-day practice at The Sawmill at Hall Tavern Farm. “We’re trying to add enough value to our 500 acres of farm and trees to have a working landscape instead of a museum,” said Jay.

“We’ve always been instilled in the land stewardship aspect [of land ownership],” said Jay. “My dad started good timber management after the War — in the late ’40s. In the ’70s I took over.”

The nearly 100-year-old farm still produces some sweet corn and other vegetables, as well as maple syrup and hay. Adding timber cutting and milling to the operation has augmented the sensitive and intimate management of the land.

Jay explained that his father’s main motivation in taking on woodlot clearing and sawing was to realize the best care possible of the land. “It got to be better to do it ourselves than to have others clear woodlots,” he said. “We would have to watch them like an eagle [to make sure things were done correctly].”

Today, Jay runs the operation at The Sawmill at Hall Tavern Farm with one fulltime employee, Jared Bellows, and seasonal employees. His overarching goal is to to tread as lightly as possible on his surroundings. He harvests trees that have been hit by lightning, stays off the grid for powering the mill to the fullest extent possible, and commits to products that extract the maximum value of wood fiber.

“We have a very small carbon footprint,” said Jay. In fact, one of the things he welcomes is the opportunity to educate students and others about how healthy forests sequester vast amounts of carbon.

Seventy percent of the lumber produced by Jay’s company is high-grade. It is dried in a small capacity (9000 bf) lumber kiln from Kiln-direct in Burgaw, N.C. The kiln was added to the operation 18 months ago.

“All material that’s higher quality” heads to the Kiln-direct lumber drying kiln. The remainder of the lumber, largely pine with knots, is simply air dried.

Jay’s team uses a New Holland All Terrain Treelander forklift to load the kiln. “The forklift saves a lot of time and saves our backs,” he said. “We carefully sticker material right off the saw and then load with the forklift.”

The small lumber kiln from Kiln-direct supplanted a generic kiln with a 1000 bf capacity. The older kiln is still onsite.

Installation of the Kiln-direct kiln with a front door and sophisticated remote controls has taken drying at Jay’s business to a higher level. “We can move pretty quickly when we get an order,” he said. “The kiln’s allowed us to be fairly nimble.”

Jay chose Kiln-direct based on referrals and experience with the team at the company. “We’d gotten good feedback from others who’d gotten good service,” he said.

As he began to talk with Niels Jorgensen, owner of Kiln-direct, Jay realized he would be buying expertise as well as a kiln. “Kiln-direct was very good about [providing] control schedules – drying schedules,” explained Jay.

The service is ongoing, said Jay. “Kiln-direct can pop in [to our computer] from North Carolina to troubleshoot.”

Jay also liked the fact that he could get the Kiln-direct lumber drying kiln up and running with propane natural gas fuel and later switch to a wood-waste boiler. In addition to being used to fuel the 750,000 BTU boiler from Central Boiler, wood waste heads in many directions.

Sawdust is sold for animal bedding and pellets. Bark is sold by the yard to local landscapers who use it as mulch. Some kiln-dried shavings from the planer mill are also sold.

Not all logs are debarked and debarking is more a step used in the spring. A debarker from Mellott Manufacturing Co., Inc. in Mercersburg, Penn. is used. Mellott has an onsite engineering and design team that can work with mills to meet specific needs.

Jay explained that he has not purchased much equipment new, preferring to purchase used equipment and invest in refurbishing and maintenance. From the inception of the mill until some nine years ago, a Lane mill was in use. Since then, a semiautomatic mill from Chase, as well as a Chase green chain, turner and edger have been in use.

“You can saw 7000 or 8000 feet a day” on the Chase, said Jay. For the last seven years, the mill has been powered as often as possible by electricity produced by solar panels on site. “We had a nice incentive from state and federal government to put [solar panels] in.”

Felling is done with chainsaws. “We like the Jonsered,” said Jay. “We have a few Stihl.” A John Deere 440B skidder is used in combination with a cherry picker, which was constructed in house from an old chassis and loader grapple, to move logs.

“We have 10 or 15 miles of wood roads, which we also use for cross-country skiing,” said Jay. “Our site is really good for pine – not much hardwood – Eastern white pine.”

Pine is sawn for lumber. Beams are made from hemlock. Oak is quarter sawn. Some ash and cherry, not much of either, are also in the mix.

“Most of what we sell [goes to] local homeowners and local contractors,” said Jay. “Most of our business is within 50 to 70 miles of the mill.”

Generally, trees that are felled reach the mill after a short trip of no more than one mile. The long list of products that are produced in the sawmill and the planer mill include posts and beams, wide pine and oak, V-groove, shiplap, tongue and groove finished flooring, barn board finished siding and custom moulding.

The Sawmill at Hall Tavern Farm is located in East Charlemont, Mass. The town is part of Franklin County in the northwest part of the state. It has approximately 1,300 residents.

“Seventy to eighty percent of our wood is dried and planed,” said Jay. “We usually don’t plane beams.”

Jay relies on a 15-year-old REX planer. “It’s a four-sider,” he said. “It opens up to about 19 inches. That’s really spectacular.”

A graduate of Suffolk University Law School and Williams College, Jay served for 15 years (beginning in 1993) as commissioner of agriculture for Massachusetts. He also served as a state representative from Charlemont from 1970 to 1993.

Jay’s commitment to coupling profitability of farms with sound environmental approaches is long standing. He explained the possibilities for doing more are great.

“In Massachusetts, only two to four percent of the material grown here is used here,” said Jay. “I think it’s a shame. It’s a missed opportunity.”

The Sawmill at Hall Tavern Farm is dedicated to “keeping things local,” said Jay. “I’m hoping others will do it – keep it local [and] keep jobs.”

Jay is guardedly optimistic. “More and more people are coming into our mill, bringing in logs [for sawing],” he said. In doing so, they “create more jobs and economic development in their own backyard.”

In addition, the more local the economic activity, the more compatible it is with a healthy environment. The reason is simple: Less energy is required to power it.

Jay is constantly evaluating his business model and weighing modifications. He sometimes exchanges sawing for time using a friend’s firewood processor. And firewood might be part of the business in future, especially if it can be sold on a contract to avoid receiving too many middle-of-the-night calls from those who have exhausted supplies.

Irrespective of the pieces that ultimately fit together at The Sawmill at Hall Tavern Farm, the fundamentals will remain constant. “Do a good job in the woods,” said Jay. “Reach and educate some people” about forests.

“[What] is really satisfying to me is to see what good forestry does,” said Jay. “You can be a good steward of forestland.”

Taking time, as he recently did with a visiting college friend, to just walk in the woods and observe the phenomena of growth and regeneration in situ is something Jay relishes. “I think [it’s what] I enjoy the most,” he said.

Also in his free time, Jay enjoys recreational and competitive sports. “I play a lot of tennis on a local USTA team,” he said. “We also have a little garden” that’s a pleasure and a free-time priority. 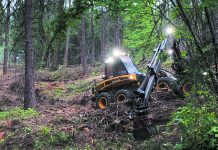