WINNFIELD, Louisiana – Uniformity of product makes load optimization easy. But logs are not the same as boxes of a single size and weight.

Even logs from plantation-grown trees can vary significantly in fiber density, water content and circumference. The variation poses an ongoing challenge for loggers striving to transport the biggest, legal load possible to mills with each run.

There are many choices for loggers that want to attain the goal of load optimization. Tony considered them. “I did research on platform scales,” he said. He concluded, though, that separate scales would “just be more trouble to move around.”

It’s the time it takes, explained Tony, and the difficulty of moving platform scales that dissuaded him from adopting such a solution for weighing. “With Vulcan On-Board Scales, you just hit a button and there’s the weight.”

To facilitate direct communication from the on-board scales to the loading crews, Vulcan offers a remote viewing handheld product- the Vulcan V700 Electronics System. Real time truck weight information is relayed from the on-board weighing system to the handheld unit via wireless transmission of data. One of Tony’s contract truckers, William S. Bruce Trucking, owns one of these Vulcan V700 systems.

“Dependability,” said Tony, sums up why he has stayed with Vulcan On-Board Scales since first deploying products from the company more than 15 years ago. Being able to trust the accuracy of a weight reading brings peace of mind.

“In the last 15 years, the Louisiana DOT has gotten a lot more [stringent in enforcement],” said Tony. “There are more weight checks on highways.”

The U.S. Department of Transportation and its state counterparts are not the only ones interested in the weight of trucks. Most mills in the Winnfield area will not pay loggers for weights over a certain limit. Consequently, it’s a losing strategy from every vantage to carry more than the legal weight on a log truck.

On July 18, 2015, McManus Timber celebrated 32 years in business. At its inception, McManus Timber was a joint effort between Tony, who brought experience from six years working for other logging contractors, and his father, Jerry McManus, who had worked in the plywood industry. After about three months, though, they split their venture with Jerry focusing on a trucking business. Jerry is now retired.

McManus Timber has 25 employees. The company clear cuts 22- to 26-year-old plantation pine and delivers the logs to mills (both saw, and pulp and paper). Logging crews use three Tigercat feller bunchers and one new Caterpillar carrier. All four of the machines are fitted with bunching heads.

Mack, Peterbilt and Kenworth tractors are in the McManus Timber fleet. There are 10 trailers – two from Pitts (one bunk, one plantation), two folding pole trailers from Bear Mfg., and six trailers from Magnolia (four bunk/bolster and two plantation).

Production at McManus Timber is quite consistent from year to year. “We stay pretty close to 300,000 to 350,000 tons annually,” said Tony.

McManus Timber is based in Winnfield, Louisiana. Winnfield is part of Winn Parish. It has a population of 15,800. Winn is situated in the north-central part of the Pelican State.

The mills to which McManus Timber delivers include West Fraser Mill in Joyce, La., Winn Lumber in Winnfield, Rock Tenn Paper in Hodge, La., and Graphic Packaging in West Monroe. The town of Winnfield is in the heart of a very active forest products region.

The relationship between Tony and Jon is of longer standing still. “He’s been doing fabrication and welding on my equipment for 20 years now,” explained Tony.

For Jon, it’s a pleasure to be able to assist loggers. “It’s a good feeling knowing that what I do helps to keep our loggers safely on the road and keeps the guesswork out of their load weights,” he said.

But the rewards of his profession derive from more than service provided, explained Jon. “Most of all, I have had the opportunity to meet people from so many areas and states and have developed many lifelong friendships.”

Helping loggers be efficient is important to Jon – whether it’s in refurbishing their equipment or through sales. “The Vulcan On-Board Scales are very user friendly for the drivers as well as the other employees,” said Jon.

Tony’s firsthand experience in the wood products industry extends to the mill side. After graduating from high school, he worked for a summer in a saw mill. It was on the logging side, however, that he would ultimately build McManus Timber.

“We started small,” said Tony. “We started with one used truck, one used John Deere Skidder, one used Husky Brute loader, two Poulan chainsaws. My dad was driving a truck. I was cutting, skidding and loading. I had one full-time log cutter.”

The original crew members at McManus Timber were Robert Nichols, a log cutter, and Tracy McManus, Tony’s brother. Tracy was skidding, and father Jerry was driving the log truck

“When I started, I did some of everything,” said Tony. “I cut, I helped load.” In its first years, McManus Timber cut for a local hardwood mill.

“After two years, I bought my first feller-buncher,” said Tony. “The first one was a used Caterpillar with pincher heads. We just used it for pulpwood. Even after we got the first feller buncher, we still manually felled log timber for several years.”

Approximately 20 years ago, Tony started working for a company that was subsequently purchased by Plum Creek. He values the long relationship with Plum Creek.

Moreover, Tony appreciates long and strong ties with employees. Many employees have been with McManus Timber for 15 years or more.

“Billy Barton has been with the company close to 30 years,” said Tony. “He started as a truck driver and switched to [running] a feller buncher.”

Jim and Jimmie are Tony’s brothers-in-law. Other family members also work for Tony.

With his more than three decades experience in the timber industry, Tony expects reliability in the equipment he purchases. Vulcan On-Board Scales exemplify what he wants from equipment. “They’re really dependable,” he said.

The single point logging scale system of Vulcan On-Board Scales that Tony uses is specifically designed for folding pole trailers and four-bolster/plantation style trucks and trailers. The Vulcan VSL electronics supporting the system allows for the mixing of trucks and trailers without any adjustments.

Loading logs is part art and part science. Vulcan On-Board Scales help give a boost to the quantitative side of the effort. On that quantitative side, the benefits that accrue from ease of weighing and accurate weighting extend in all directions.

For instance, trucks carrying the load weights for which they were designed perform better and consume less fuel. Such trucks also require less maintenance and less-frequent parts replacements. Lower fuel consumption over time translates to fewer runs for refueling. Time saved is time that can be invested in other activities.

As he reflected on his 32 years in business, Tony explained that he is happy with the results of his efforts and he looks forward to continuing along the same course. “Success is being able to provide continued employment to men and families I’ve grown to love and respect,” he said.

“I’ve always felt that when a man or a company provide you a service, they deserve to be paid,” said Tony. “[Elizabeth and I] we’ve never lived beyond our means. We came from hard-working families. We have faith in God.”

When Tony has free time, he enjoys spending hours with his grandchildren. He also tends a small southern yellow pine tree farm, where he built a 27 acre lake himself and stocked it with bass and bream.

At the lake, Elizabeth fishes. “I like watching my wife catch big bass,” said Tony. 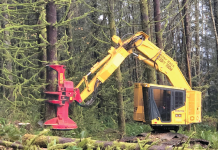 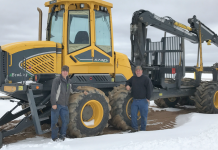