OWENTON, Kentucky — Robbie Eades has worked in the logging industry most of his life and had his own small business during that time. He also has dabbled in and out of the firewood business at various times.

Now, with the purchase of a firewood processor from CRD Metalworks, he is all in, resuming firewood operations and hoping to grow the business to a higher level and at the same time wanting to eliminate the manual labor involved in cutting and splitting firewood.

Robbie, 48, operates Eades Logging from his home and farm in Owenton, Kentucky, which is almost in the middle of a triangle formed by Louisville to the southwest, Lexington to the southeast, and Cincinnati to the northeast.

Robbie cuts about 10 loads of hardwood grade logs a week. “I just select cut grade timber out of the woods,” he said. He does virtually all the work himself. He fells the trees manually with a Stihl 461 chainsaw, then trims up the stem and removes all the limbs. Depending on terrain and conditions, he has three skidders from which to choose: a 1996 John Deere 648 grapple skidder, a 2005 Caterpillar D5G dozer, and a 1990 John Deere 640D cable skidder. At the landing, he has a Prentice 384 knuckleboom loader with a slasher saw to buck the logs, stack them, and load them onto a truck. Robbie also has his own tractor-trailer although he contracts with someone else to drive it and pays him by the load.

Robbie has been in the logging business for 23 years. He has been in and out of the firewood business over the years and recently resumed it. “That’s how I started the whole logging operation in the beginning,” he recalled.

He resumed his firewood business about two years ago when his two sons were old enough to be of some help. “It wasn’t big time,” he explained, but something he now could do with his sons. His wife, Tina, does the bookkeeping. He had kept a hydraulic splitter that he bought in the past. He did all the bucking with a chainsaw.

As much as he has been in the firewood business in the past, he has never owned a firewood processor although he knew some people who owned them.

He decided to buy a firewood processor for two reasons: to increase firewood production and make the work easier on himself. He turned customers away the past two years, he said, because he simply did not have the time to cut and split firewood. With a machine, he said, he can produce in an hour or two the firewood it would take him all day to produce by hand.

“Your back ain’t hurting,” he added, just running the machine.

Robbie spent about six months researching companies that manufacture firewood processors. He read up on them in magazines, went to look at some, called manufacturers and got their brochures and videos, looked at more videos on the Internet. He obtained referrals to customers and called them up.

Robbie talked with the owners and staff of CRD Metalworks several times. “They seemed like a pretty good group of guys,” he said.

Robbie was duly impressed with the company’s Rapido Loco Junior firewood processor. “There’s not another machine out there — without spending a lot more money — that can compare to that machine,” said Robbie.

The CRD Metalworks Rapido Loco Junior is designed and built to process logs up to 16 inches in diameter and 20 feet long. It is powered by a Deutz 60 hp, air-cooled diesel engine and has a 42-inch Simonds slasher saw with replaceable carbide tips and a six-way splitting wedge. Other features include a two-strand 12-foot live deck and 24-foot conveyor.

Robbie originally planned to buy a model with a bar saw, but he decided to “bite the bullet and pay the extra.”

“It cuts quicker,” he said, and the maintenance will cost less. “It’ll pay for itself.”

The CRD Metalworks patented brake can stop the slasher saw instantly, another feature Robbie liked. “If something goes wrong,” he said, you need that thing to be stopping.” Robbie knew from talking to the owner of another CRD Metalworks machine — without a brake — that the slasher saw will run about a minute before coming to a stop.

Robbie wanted to see one of the CRD Metalworks firewood processors operating. The company gave him a list of several customers in the region, but none was close by; the nearest was in Ohio.

By that time he had enough information to make up his mind. He drove with a friend to CRD Metalworks in Massachusetts — more than 800 miles one-way — to haul it back with Robbie’s pickup truck. While he was at CRD Metalworks, he got instructions on how to set up the machine, run it, and maintain it. He processed a few firewood logs to get used to operating the machine before returning to Kentucky.

He ran the machine back home on his farm the day before being interviewed in early July. “I have no complaints so far,” he said. “It does what they said it would do.”

“It’s very easy to maneuver and transport and set up,” he added.

He considered buying a used firewood processor but generally Robbie buys new equipment. “I like to buy as much as I can new,” he explained, because there is no telling with used equipment how well it was properly maintained or if it was abused. “I like new shiny stuff,” added Robbie. “I like to scratch it up myself.”

He will run the processor over the rest of the summer. In fact, he already has sold some firewood wholesale to a young friend who sells it to customers in Indiana.

For now the machine is set up outside, but Robbie plans to build a shed to house the machine later.

His firewood sales usually start in October and go through April. “When we get a frost, people start buying firewood,” said Robbie. He used to sell some through the summer, and he expects to be running his new CRD Metalworks firewood processor this summer. “We’ve already sold a little bit,” he said.

Robbie does not offer delivery service. His customers drive to his farm to get their firewood. His sons deal with the customers, collecting the money and helping them load the wood. Most customers come in a pickup truck or pull a small trailer. He is planning on ramping up delivery service when his sons — now ages 9 and 12 — are old enough to drive and get their driver’s licenses. They would be able to deliver wood to customers in the vicinity of some of the major cities in the region, within 30-45 minutes, which would open up more markets for the business. In fact, Robbie has been considering in the meantime hiring a couple of men he knows who are about to retire and utilizing them for delivery service.

In his logging business, Robbie cuts all hardwood – mainly red oak but also white oak, ash, hickory, walnut and cherry. He works on a percentage basis with the landowner. On most jobs they split the money paid by the mill for the logs, 50-50. Depending on the terrain, he may get a higher percentage, but in most cases the land is flat enough that it is easy to get the wood out.

He works on tracts ranging from about 25 acres to 100 acres. “I just take the mature trees out,” he said, anticipating he could do another round of select cutting in the same tract about 10 or 12 years later.

Robbie supplies wood to about six different sawmills that cut grade lumber; they are within 100-150 miles. The mills are buying steadily, he said in an interview in early July. “Looking good right now, which is a good thing,” he said.

Before the Great Recession hit, Robbie would run four or five jobs at one time. He would do one job himself and hire other logging contractors to do the others. When the economy nosedived, however, and business slumped, he “backed it down” and began working alone.

Robbie grew up in Clarksville, Ohio, but as he began working in logging, most of the business always seemed to be in the area where he now lives in Kentucky. When he and his wife married, he was doing a lot of work in Kentucky. She was from Tennessee and did not want to live in Ohio. Robbie drew a circle on a map and told her their home would have to be in it. They eventually bought a 44-acre farm where they have lived about 13 years. They use a portion for a garden and sell hay off their pasture land. The rest is forest, and Robbie and his sons hunt it for deer and turkey. He and his boys also enjoy riding 4-wheelers on the property; the family has three of them. The family also enjoys camping, boating, and fishing.

“If I’m not working, I’m hanging out with the boys,” he said. 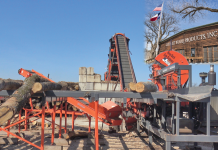 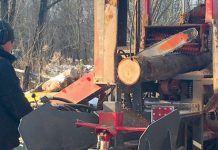 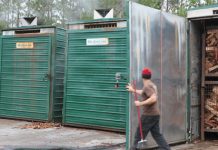