SPRING GREEN, Wisconsin — Many business experts advise increasing production to increase profit. Jim Birkemeier, owner of Timbergreen Farm, holds the opposite philosophy.
Jim believes seeing a product through from start to finish, tailoring manufacturing to exactly what a customer wants, is the way to increase profit. He cites case after case of people who are willing to pay a premium for custom wood products.
Recently a resident of the Maryland Eastern Shore visited the Wisconsin forestland Jim owns. The man personally selected the curved white oak tree he would use to build a 35-foot long boat. “The shape of the tree is the shape of the boat,” Jim explained.
“We do lots of interesting projects,” said Jim. Flooring is his mainstay, but grandfather clocks and other wood products have had their start at Timbergreen Farm, which is located in south-central Wisconsin, just west of the capital city of Madison.
We have 200 acres of forest,” said Jim. “And we harvest one tree per acre per year — very carefully, very selectively.”
Jim harvests mainly red and white oak although he also cuts some cherry, hickory, elm, aspen and other species. He manufactures the lumber products from his own trees, making flooring, moulding and other trim lumber products.
Jim gives meticulous attention to every component of the harvesting and manufacturing processes. Wood is dried in solar-powered kilns that he designed himself, and finished flooring is stored in a humidity-controlled environment.
For most of his 15 years in business, Jim had not been able to complete the cycle from forest tree to manufactured product. “I’ve always wanted a moulder,” said Jim. “The moulding is the biggest value-added product there is.” However, the price of moulders was prohibitively high, and Jim did not have three-phase electric service for industrial equipment.
The situation changed immediately, though, when Jim saw a Logosol PH 260 4-head moulder-planer being demonstrated for a local co-op. “When I saw it, I bought one,” said Jim. It was “just exactly what I’ve been waiting for for 15 years.”
Johnny Taylor, the local Logosol representative who was giving the demonstration, said that Jim was called away after about 30 minutes into the demonstration. By the time Johnny had finished the demonstration, however, Jim had already called Logosol and ordered a PH 260 moulder-planer.
By using a phase converter, Jim could run the Logosol PH 260 three-phase unit in his workshop, which he had converted from a barn. The Logosol weighs only 830 pounds and is compact; it does not take much space. The Swedish firm, Logosol, makes the Logosol PH 260 moulder-planer, and it is sold in the U.S. by Logosol Inc. in Madison, Miss.
The performance of the Logosol moulder has been everything Jim expected. “It’s just perfect for my operation,” he said. “I was able to start (using it) right away.” Even better, he explained, “Every customer so far has been very happy with the product.”
The engineering behind the Logosol PH 260 gets high marks from Jim. “You can tell whoever designed the machine understood what it was supposed to do. It’s perfect for the small wood shop. It’s simple. It’s commonsense. It very quickly paid for itself.”
When Jim started his business, he bought a portable sawmill that was new in 1988. That machine is still in service. “It works so well,” he said, “I haven’t replaced it.”
For cutting trees, Jim relies on Stihl chainsaws. He is trained in the Game of Logging, an event-driven approach to safety that was developed by Soren Eriksson to raise professional standards for loggers using chainsaws.
As for skidding, Jim said, “We’ve got quite a variety of tools.” He has worked with Amish neighbors, using horses. He has adapted Native American techniques. He has also used a 4×4 ATV, a fetching arch, and a winch on a tractor with radio control.
“You need the right tool,” said Jim. “We’re in a hilly region of Wisconsin,” and safety is a must. “I’m probably the world’s slowest logger,” said Jim.
“I’m always tending the forest,” said Jim. He likes that phrase, “tending the forest,” which is the one used in Germany, because it describes what he does. As he looks for trees to harvest, he also removes ‘weed’ species and prunes young trees.
Jim earned a bachelors degree in forestry at the University of Wisconsin-Madison. He worked as a professional forester before launching his own business. At age 50, he still takes every opportunity to learn more. Earlier this year, he spent some time in Germany studying forestry methods there. He bought his first forestland in 1968.
“We try to market what our forest naturally produces,” said Jim. For example, if a walnut tree blows down, the wood is processed into flooring or some other product.
Half the flooring Timbergreen Farm sells goes directly to homeowners who install it themselves. Jim also installs it for about half of the homeowners to whom he sells.
In Wisconsin, the average moisture content of wood flooring year-around is 6%. So Jim maintains that moisture level in a humidity-controlled room he built for storing flooring.
Now that he has the Logosol PH 260 moulder-planer, Jim offers a custom trim package of baseboard, casement and other components. In the past he contracted for the moulding, but now he manufactures the entire trim package himself.
Jim built his own log home from big tooth aspen seven years ago. The home has 16-inch wide plank floors.
Word-of-mouth referrals account for the steady stream of customers at Tim­bergreen Farm. Jim also sells his design for solar-heated kilns through his website, www.timbergreenfarm.com.
(Editor’s Note: The preceding article was an advertorial paid for by Logosol.) 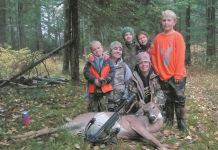 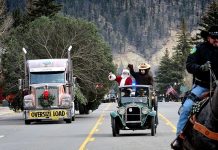