The Heritage Forests Campaign bought newspaper and radio adsin the nation’s capital, Massachusetts and New York, coinciding with PresidentClinton’s vacation plans. The activists wanted Clinton and his advisers toget their message while he vacationed on Cape Cod, Martha’s Vineyard and the FingerLakes region of New York.

The organization wants the Clinton Administration to makepermanent a moratorium on building roads in 33 million to 60 million acres oflands in the 192-million-acre national forest system.

• The U.S. Forest Service has temporarily haltedlogging in four counties in western North Carolina after thediscovery of a colony of 28 rare Indiana bats in the NantahalaNational Forest. The suspension affected about a dozen timber sales.

The Indiana bat is on the federal list of endangered species.

Products made of cedar, redwood, lauan and trees from certaingeographic regions will be phased out of its stores by 2003.The action willaffect about 30 vendors.

• Environmentalists are using a new toolto advance their agenda in Arizona. A published report says they’refocusing on “nectar corridors” and citing “diminishingpopulations of pollinators.”

The issue is the subject of a study being conducted by theArizona-Sonora Desert Museum. Museum director Gary Nabhan said the factors causing areduction in “pollinators” are land development and ranching.

Armed with a $500,000 grant from Ted Turner’sfoundation, the museum is trailing bats, hummingbirds and butterflies to document theproblem and then will make conservation recommendations.

• The U.S. Fish and Wildlife Service hasproposed adding the scaleshell mussel and the goldensedge to the federal list of endangered species.

The proposed listing of the mussel has potential impactfor the forest products and paper industry. Officials believe it originallyinhabited medium to large rivers throughout the Mississippi River basin, butnow is limited to a few locations in Missouri, Arkansas, and Oklahoma.

The golden sedge is found only on the edge of pinesavannas in the northeast Cape Fear River watershed of North Carolina.

• The U.S. Fish and Wildlife Service extended the publiccomment period for its proposal to put the Canada lynx on the federal listof endangered species. The comment period was extended to mid-September.

• Greenpeace suffered a blow recently when Canadianofficials refused to grant it status as a charitable organization.

The Canadian equivalent of the U.S. Internal Revenue Service said theradical group had “no public benefit” and its attempts to closeindustries could push people into poverty. It was the third failed attempt byGreenpeace since its standing as a charity was first revoked in 1989.

Meanwhile, Greenpeace has been stepping up its anti-loggingcampaign in British Columbia.

• An environmental group wants Alaskato reverse its choice for a seat on a citizens committee that overseeslogging in the Tanana Valley State Forest. A fisheries biologist wasappointed to the environmental seat on the 12-member advisory panel.

• The U.S. Army Corps of Engineers closeddown a logging roadatVail Resorts in Colorado because itspills sediment into a half-acre of wetlands. The closing leaves the nation’s largestski resort with more than 1 million board feet of cut timber and no way toremove it.

The resort didn’t even want to build the road — it wasordered to by the U.S. Forest Service so logging trucks could avoid the village.

The resort could be slapped with civil fines of $27,500for each day since the road was built about a year ago.

• Virginia lawmakers have begun a two-yearstudy of the impact of chip mills. The study commission is made up of legislators,the state forester, and representatives of industry, environmental groups, and landowners.

• Environmentalists in Arizona and NewMexico are calling for a halt to harvesting of large, old ponderosapine north of the Grand Canyon.

They also want John Bedell to be fired; he’s the supervisor of theApache Sitgreaves National Forest. The environmentalists say he has failed to protectwildlife and is too friendly to the timber industry.

Earlier, an environmental group called Forest Guardians successfully challenged aplan to cut up to 90 percent of the trees surrounding Flagstaff in order to stopfires. 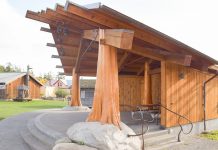 The Road to Training Ponsse Customers Was Paved by Logging with...